You are here: Home>Locations>Coventry>The Phantom Coach, and Other Coventry Tales

The Phantom Coach, and Other Coventry Tales 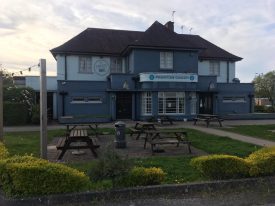 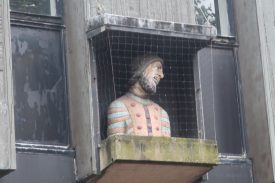 On the A45 Fletchamstead Highway in Coventry is the Phantom Coach pub – one of my grandfather’s drinking places back in the 1930s. Curious as to how it got its name, it seems that there is literally a phantom coach which is said to haunt the area near to the pub.

Two independent reports of it come from the 1930s. A couple living in Canley Road said that they heard the sound of galloping horses going past their house at around midnight. They looked out of the window and predictably saw nothing. Asking one of the neighbours, she said that she had heard nothing, but did believe them. According to her it was an omen of bad luck. Sure enough, a few months later it was the Coventry blitz. A couple coming from Berkswell had it tailgate them one night. People tailgating you is annoying, but phantom coaches doing it must be something else! They had it come up behind them and no matter how quickly they went, it kept up. In the end they pulled over to let it past. The wife said that she could actually see the coachman’s eyes… they looked glazed.

What was the phantom coach originally though? According to legend, a coach was going down the highway at speed, one Christmas Eve some say. Then it either crashed into a swamp, sinking with all on board, or crashed into a pond drowning all on board. The passengers were goners either way. If you do go down the Fletchamstead Highway at certain times of year, on the few green areas left you can see reed type plants growing which you associate with marshy areas.

The pub is said to be built on the now drained pond or swamp that the coach crashed into and there are both staff and customers who have witnessed strange happenings. According to popular theory, it is said to be the ghost of the coachman, although two hundred years ago the Fletchamstead Highway was not a coaching road, so it could not be him. There again, if he had missed his way and gone down there by accident, that might explain him crashing into the pond/swamp.

My grandfather had been in the First World War, but was too old to go into the Second World War and had a reserved occupation at Riley cars (which I am told built Beaufighter under-carriages during the war).  He was walking through Broadgate one night, the black out was on, which made it even darker, and there was a seething mass going down the road. As he got closer he saw that it was a load of rats! They had obviously been bombed out and were looking for somewhere else to live, led by a king rat out in front. A police officer on duty witnessed it as well.

Another story was that a long time ago there had been a Peeping Tom pub (Peeping Tom of Lady Godiva fame) which had a painted bust of Tom. Anyway when the pub closed down, the bust (there were actually several around Coventry) was on display in a shop window. One day when my grandfather came home (by this time Coventry was getting bombed) he said that someone had put a chamber pot on Peeping Tom’s head in lieu of a tin helmet, to protect him from the bombing. A case of the British sense of humour shining through! The bust is now mounted in the shopping centre.

A story which my dad told me was that after Coventry getting blitzed at night time, the Luftwaffe used to send high altitude condor reconnaissance aircraft over during the day to photograph the damage done. They flew far too high for RAF interceptors to catch them, so the authorities put a large Royal Navy gun on the left hand side of Gibbett Hill Lane,  as it could send anti-aircraft shells up that high. One came over one day and they got a direct hit, but nothing was found of the aircraft –  it must just have been vapourised.