You are here: Home>Locations>Coventry>A Chapelfields Bakery, From Alfred Pails to the 1950s

A Chapelfields Bakery, From Alfred Pails to the 1950s 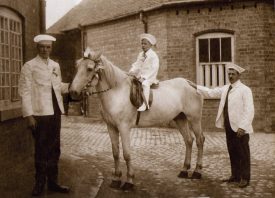 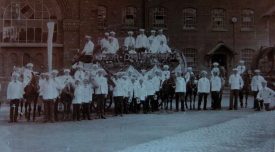 Bakers' entry in the Coventry Carnival 1907. Taken outside Robbins and Powers Flour Mills in Wheatley Street which shows how many bakers there were in the city at that time! The large white mark on the left hand side of the photograph is a bag which was held up to bedroom windows to collect cash! The display on the side of cart says ‘Your Daily Bread’ made from bread. Little Alf is the 3rd boy on the right from the bag.
Image supplied by Doris Pails. 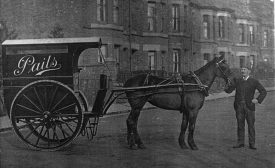 Earlier, I described the history of the building which housed our family bakery in Chapelfields. In this section, I would like to explore the background of my family who worked in it.

Alfred Hugh Pails was born at 43 Thomas Street, 6th May 1900. He also became a Master Baker and was apprenticed to his father on June 1st 1914. He was enrolled on the Freeman’s Register 26th June 1914. To become a Freeman of the City was an honour, gained by serving a Master tradesman in the City for at least five years. This custom is peculiar to the City of Coventry.

As a matter of interest a Freeman of the City of Coventry, according to an old Act of Parliament, had by custom rights of pasturage over the common fields of Coventry (e.g .Hearsall, Whitley, and Gosford Green).

On the death of his father in 1939 Alf, as he was known, inherited the business. He worked hard and built up the business so that eventually he had three horse drawn vans and five motor vans delivering house to house in the City. The first motor van was purchased in 1928, it was a Trojan. Deliveries covered most of the south side of the city, delivering to Chapelfields, Earlsdon, Tile Hill, Broad Lane, Canley, Eastern Green, Allesley, Coundon, Radford, Brownshill Green, Styvechale, Green Lane, and Cheylesmore.

When the horse drawn vans were used, it was well known that the horse knew the round as well as the delivery man. The horse would move on to the next call while the driver was serving a customer. One driver was known to call at the ‘local’ for his lunch break. When he was away on holiday and someone else did the round, the horse refused to go by the pub without stopping in the forecourt! Many a driver was told off about his horse nipping off the heads of tulips from front gardens while he was delivering along the road. Local gardeners would gather outside the stables on Sunday mornings to collect the horse manure for their gardens. This was an extra income for the driver of the horse van as the few coppers they received paid for their beer money. For many years some of the horses were stabled at the bottom of the vicar’s garden behind St Mary Magdalen Church1. The story goes that one of the horses got out of the stable into the vicarage garden and badly damaged the lawn!

The bakeries and the blitz

The 14th November 1940 was a significant date in the history of Coventry. The city suffered a 12 hour blitz from seven o’clock in the evening until seven the next morning when the ‘all clear’ siren sounded. All the bakeries were put out of production. There were no supplies of gas or electricity and the water was contaminated. A convoy of two cars and seven motor vans was organised by Philip Sutton of the Crown Bakery, Maudslay Road, to go to Birmingham where they collected 4,500 loaves for the people of Coventry.

The third generation, another Alfred Hugh was born 25th May 1930. He too was to become a Master Baker and Confectioner. When he was 14 he was apprenticed to his father on 20th November 1947, and was enrolled as a Freeman of the City2. On finishing his apprenticeship Hugh as he was known, became a partner in the business.

In the 1950s factories began to offer better wages than could be offered in the food trade and it became more difficult to obtain staff. If a driver didn’t turn up, Hugh or his Dad would have to do the bread round after they had finished baking, sometimes delivering into the evening. Hugh said he could remember going out late one Christmas Eve because they hadn’t baked enough bread. Families in those days used to have several loaves a delivery as bread was a staple part of the diet then.

In the early days the bakery only produced bread. During the war a limited amount of cakes were produced due to food rationing. Gradually trade was built up producing a wide variety of cakes to our own recipes. In later years fresh cream cakes were one of the specialities.

In the next section, I shall complete the story of the Pails bakery and its history.

1 The church with the blue roof at the junction of Hearsall Lane and Sir Thomas Whites Road.