You are here: Home>Locations>Kenilworth>St. Nicholas and St. Barnabas Churches, Kenilworth 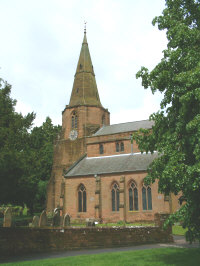 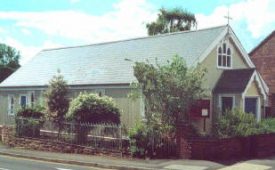 St Nicholas Church, situated in the beautiful grounds of the ruined St Mary’s Abbey, within the Abbey Fields, has been a place of peace and prayer for over 700 years. In 1291 St Nicholas Church was described as being in the patronage of the Prior of Kenilworth Priory. The Priory was founded in 1122 and raised to Abbey status around 1450 and stood to the south of the Church until its dissolution in 1538 by King Henry VIII.

The Church has had several Royal worshippers over the centuries, most notably Queen Elizabeth I, who came to worship here in 1575 while staying at Kenilworth Castle.

In common with many others, the Church suffered during the Civil War. There are bullet marks on the north wall and, in 1646, the interior had to be cleaned and repaired after Cromwell’s troops had used it as a billet. The Church had to be cleaned again in 1649 after similar abuse by Scottish troops. Parish records indicate the work cost 5/- (25p) on each occasion – a considerable sum at the time.

The building has been altered and expanded over the years. The tower was added between 1320 and 1400 and the main structure of the nave dates from this period. In 1580 the Earl of Leicester carried out repairs and altered the roof of the chancel.

The Church took its present appearance, both inside and out, during the 19th century when the transepts were added, the chancel enlarged and the interior refitted. The Lady Chapel was completed in 1932.

Previously known as St Nicholas Mission Room, services at St Barnabas began back in 1886 in the community of Albion Street.

A mix of contemporary and Anglican worship is followed by both churches – further details about its community can be found on the churches’ website. There is more about the history of St. Nicholas church building on the history page.