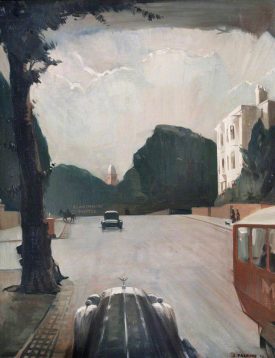 For some people, autumn is a rather magical time of year. Colourful trees, drawn days and crisp nights, it presents us with the perfect opportunity to wrap up and contemplate the long winter ahead. Personally, this time of year always evokes a sense of death and decay. The lost warmth of summer and yet another year gone by all too quickly.

The oncoming of autumn often brings a particular poem to mind, which features one of Warwickshire’s most notable towns.

Death in Leamington, written by John Betjeman, is the perfect poem for autumn. It was one of the first poems Betjeman ever had published in the opening years of the 1930s, decades before he became Poet Laureate in 1972.

Within the poem is the tale of busy nurse who discovers that her mistress, who inhabits a grand house in Leamington Spa, has died. Betjeman, an ardent supporter of historic buildings, explores the themes of death in comparison to the decay of the surrounding architecture. He makes descriptive references to the “big round…plate glass windows”, “the peeling stucco” and the “yellow Italianate arches”, comparing these features to the “gray decaying face” of the deceased occupier. The remarkable attention to detail and evocative imagery, including the arrangement of furniture and sounds of dropping plaster, captures the scene perfectly.

Betjeman’s poems were often based on specific places, rather than abstract themes or ideas, which accounts for his interest in Leamington Spa. It is likely that the town’s graceful Regency buildings and crescents may have attracted the poet, who played an active role in several conservation societies including the SPAB, the Victorian Society and the Georgian Group. A popular statue of Betjeman can be found greeting passengers at St Pancras Railway Station in London, an imposing neo-gothic building that the poet helped to save from demolition in the 1960s.

If you would rather not read the poem, then you can hear it read with great eloquence by Kenneth Williams and Maggie Smith from an episode of Parkinson originally aired in 1973.