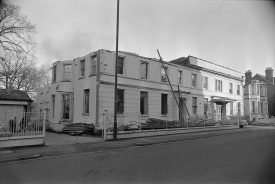 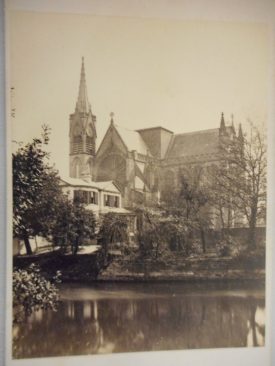 All Saints and the Priory taken from the Jephson Gardens in the 1860s.
Warwickshire County Record Office reference PH473/112 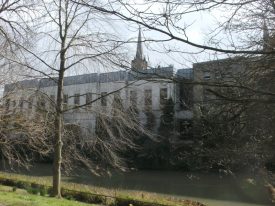 Modern photographs taken from more or less the same spot as the 1860s view.
Image courtesy of Richard Neale

The first residents after the alterations were the new owner, Mr Reynolds and his family. There is no indication as to whether his widow continued to live there after his death in 1888 but in 1890 it was empty.

Although the Priory had been one of the town’s most prestigious residencies, it had been in a slow decline since the Rev. Craig concreted over much of its once beautiful grounds to build his ill-fated ice rink. This decline continued for the next 99 years until in November 1975 Leamington lost another of its historic buildings.

I did visit the Priory as a child as part of a class visit from Clapham Terrace School to the then GPO. Unfortunately, after 50 plus years I have very little memory of the visit. What I do remember from childhood is watching the mailbags on a sort of overhead conveyor belt which took them from one side of the building to the other. If the old warehouse doors were open you could watch as the bags appeared through a trapdoor on one side of the old loading bay hanging from the conveyor before disappearing through another trap door on the other side of the bay.

Another thing that was lost following the demolition of the Priory and the building of the new Post Office parcel deport, was what remained of the view of All Saints from the Jephson Gardens. Unfortunately, this means it is no longer possible to fully appreciate the full grandeur of the church’s architecture that took so much of the Reverend Craig’s time and money to create.