You are here: Home>Locations>Alcester>Lucky Find of 2,000 Year old Artefact in Alcester

Discovered in resident’s back garden 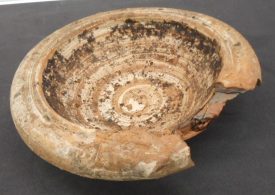 The mortarium had been used as a bird bath for a number of years before it was brought for identification.
Image courtesy of Sara Wear, Warwickshire Museum

When you’re digging over your garden you don’t expect to find much, aside from some worms and the occasional bit of rock. If you’re a bit unlucky you may even stumble across the place where someone buried an old beloved pet, but you don’t often find ancient household kitchenware.

A few years ago, Mr. Taylor found an almost intact earthenware bowl in his garden in Alcester, and as he liked the look of it he kept it as a bird bath. After a visit to Roman Alcester Heritage Museum, where she noticed similar items on display, Mr. Taylor’s daughter suggested that he bring the bowl in. During the Roman Festival event at Globe House this May Sara Wear, Curator of Human History for Warwickshire Museum, was able to identify the bowl as an almost complete Roman mortarium. It dates to around the 2nd or 3rd century AD.

What is a mortarium, I hear you ask? They were used the same as we use a pestle and mortar today, and the Romans made the interior of the bowl’s surface purposely rough with embedded grit to grind up spices, herbs and make sauces. Aside from making tasty additions to their everyday menu, these often pungent sauces were used to disguise the flavour of the meat, which could sometimes be past its best.

It is very unusual to get an object like this that is so complete. Most pottery on archaeological sites was thrown away because it had been broken in its time. This particular mortarium could possibly have been made in Mancetter, near Atherstone, where there was an important mortaria production site.

On realising the significance of the item, Mr Taylor subsequently donated the mortarium to the Warwickshire Museum collections. Wherever possible we like to put the things that people find back on display where they were found and in this case Roman Alcester allows us to do this.

The item is on show at The Roman Alcester Heritage Museum at Globe House, which is open Monday, Wednesday, Thursday, Friday 9:30am – 5:30pm and Saturday 10am to 4pm