You are here: Home>Locations>Warwick>Gwen Lally. Gender and the Warwick Pageant of 1930

Gwen Lally. Gender and the Warwick Pageant of 1930 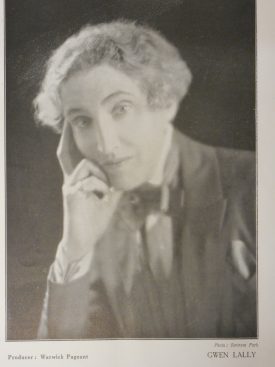 Portrait of Gwen Lally in the souvenir programme for the Warwick Historical Pageant ('The Spirit of Warwickshire').
Warwickshire County Record Office reference CR4766/9 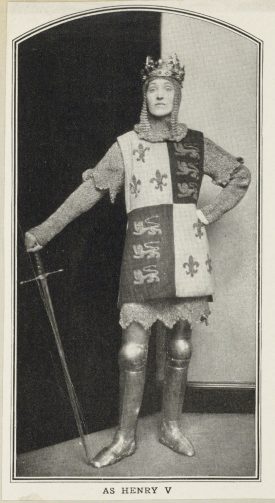 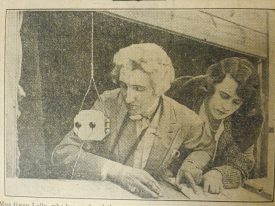 When you hear someone mention ‘The Warwick Pageant’, you might assume that they were referring to the pageant of 1906. However, while this was the first such event, it was by no means the last. Warwick played host to at least three more pageants over the course of the 20th century. By the pageant of 1953 the glory days were over; attendance was declining and profits were turning to losses. In 1930, however, the public was still interested and the Great Historical Pageant drew a total audience of over 45,000, ‘surpassing the attendance of the 1906 pageant’.

The various scenes of the Pageant were a real spectacle, ‘ablaze with costume, colour and animation’.1 They covered the history and traditions of Warwickshire, as well as a number of Shakespearean elements. Throughout it all, the grandeur of royalty was a particular theme.2

More remarkable, perhaps, than the pageant itself, was the person behind it all; pageant-master Gwen Lally. Dr. Susana Cory-Wright describes Lally as ‘the first woman to succeed in this sphere’.3 The newspapers described Lally as ‘”a power”, possessing amazing vitality, quick understanding, and a ready sense of humour.’4 They were also, in many ways, a pioneer.

Lally was not afraid to defy gender conventions and challenge boundaries. They formed friendships with a number of prominent women’s rights activists who were also involved in the theatre, including Edith Craig (daughter of Dame Ellen Terry) and Vera (Jack) Holme. Gwen Lally generally opted to wear ‘male attire’, as can be seen in many of their portraits. Before going behind the scenes as a producer, Lally performed on stage. They ‘always play[ed] male parts’ – except on one occasion, in Dinner Together in 1914, when they played Lena Johnson, ‘a male impersonator a là Vesta Tilley’.

Lally toured the country acting and made at least one stop in Warwickshire. In 1916, they performed in Stratford-upon-Avon as a ‘male impersonator’ in a piece entitled “Hims”, Ancient and Modern.5

‘You are a pageant in yourself’

Lally’s involvement in the Warwick Pageant came through their association with the recently-formed National Federation of Women’s Institutes (WI). Lally adjudicated a number of regional drama competitions for the WI throughout the 1920s, including the Warwickshire region.6 These events offered women the opportunity to dress as men and perform in male roles. The local newspapers describe Lally’s ‘praise and criticisms’ of the performers. These included recommendations on how to apply make-up in order to appear ‘manly’, and a comment that ‘three years ago I spoke to you about your beards; you were so generous in your grey hairs, beards and moustaches. You have completely altered that, and done so well’.7

Gwen Lally also expressed a particular attachment to Warwickshire and its association with the Bard, ‘do please go on with Shakespeare… you in Warwickshire have the greatest pull over the whole world.’8

Pageants with casts of thousands

During these years, Lally also worked with the WI to produce some relatively small-scale village pageants. They soon moved on to a larger scale, producing pageants with casts of thousands. The Warwick Pageant was Lally’s ‘most ambitious pageant yet’.9 It was organised by (and raised money for) the Warwickshire Federation of Women’s Institutes, under Lally’s guiding hand. They directed the performance through a single microphone, from 40 feet up – a totally new approach.10 Photographs of the event show that both women and men performed in male roles, and compared to the 1906 pageant there were many more women involved, both behind-the-scenes and in leading roles.11

George Bernard Shaw once wrote to Gwen Lally; ‘you are a pageant in yourself’. Looking back over their remarkable career, it is hard to disagree.