Strictly a first for the Royal Spa! 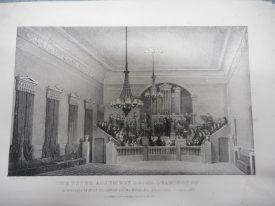 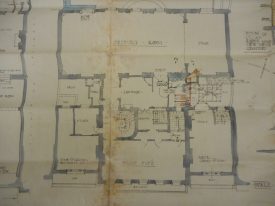 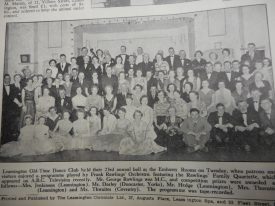 The above photograph appeared in the Leamington Spa Chronicle for 5th May 1956 and is taken looking towards the stage.
Image courtesy of the Warwickshire County Record Office 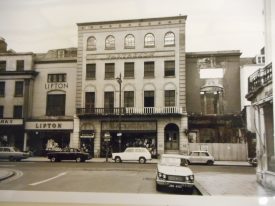 This Photograph was taken in September 1969 and shows No. 50, formally Thompson’s, completely gutted and the upper floors of No. 52, formally the Blue Café/Assembly Room derelict and open to the sky.
Warwickshire County Record Office reference CR 3961

It could be argued that the high point for public dances was during the Second World War, when the boost they gave to the morale of both service personal and civilians, was used to full advantage. In towns such as Leamington it was possible to attend a dance every night of the week if you wanted. In fact if you worked for the town’s largest employer, Lockheed, you could even go dancing during your lunch hour. With music for dancing being played in the company’s own ballroom.

That said public dances had been part of life for hundreds of years before that.  Even in the small village of Leamington Priors it’s likely there were dances held for harvest celebrations, weddings etc, and were probably held in a barn or a room at the local inn – for a village with only around 300 inhabitants it’s unlikely to have had a ballroom.

The town begins to grow

This changed as the town began to grow at the start of the 19th century. With the New Assembly Rooms in Bath Street (which older residents may remember as The Blue Café, or Embassy Rooms) claiming a first sprung dance floor when it opened in August 1821, not only for the Royal Spa, but also for England!

It was not the first ballroom in the town, that is an honour that probably goes to the Upper Assembly Rooms, which stood on the corner of what is now Regent Street and the Parade. The assembly rooms opened on 24th September 1812 but were demolished (and the ballroom lost) in 1878 to make way for the building formerly occupied by the Woodwards store, a building which, apart from the façade, was also demolished in the early 2000s?

The ballroom at the Regent Hotel also predates the New Assembly Rooms; the hotel opening on 19th August 1819 with the ballroom running along the whole of the north side of the building, where its windows opened on to formal gardens.  Although no longer used as a ballroom (and the windows that once looked out on to formal gardens now look out on to the concrete wall of Regent Square house) the room, along with many of its grand features survive. So who knows dancing may one day return to this still elegant room.

The sprung dancefloor is an Italian invention and works by cushioning the dancer’s steps as opposed to deadening them the way a normal floor does. Thus making it a lot less tiring on the feet and calf muscles etc., plus adding a little spring to the dancer’s steps.

Probably the most famous example of a sprung floor is the one in the Tower Ballroom at Blackpool.  This is so well sprung it can be seem to almost ripple if jumped on. The modern sprung floor is a kind of sandwich.  The bottom layer is fixed and on top of that, placed at regular intervals, are what are probably best described as spacers, with the dance floor then laid on top of that. The space between the top and bottom layer giving it the spring.

The plan showed on this page dates from 1926 and shows the ballroom, which measured 65 feet by 32 feet 6 inches and ran the whole length of the first floor behind numbers 50, 52 and 54 Bath Street.  It was part of the Blue Café complex at number 52 which originally had a double portico over the street, the top part of which was removed in 1835 and the lower part in 1892.

The floor at the Assembly Room was probably better described as a suspended floor, as in the book “The Leamington we used to know”1 Basil Jones recalls it as being supported by pillars some of which were hollow containing heavy weights connected to the floor above by chains.

Since it opened its doors in 1821 the New Assembly Rooms served as, amongst other things, the Leamington Music Hall during the mid-19th century and a cinema from around 1914 to 1921.  However, for the majority of its life it was used for what it was intended, dancing.

The end of the floor

Sadly as the 1960s dawned, like many large ballrooms/dance halls, the cost of running it grew too much and in 1962/3 it became a store for Barnwell’s Ltd2 and in 1965 a store room for the Thompson’s fruiterers and greengrocers. I’m sure I can remember visiting Thompson’s as a child and my mother commenting on how sad it was that the lovely ballroom, where she had spent many happy hours dancing, was now being used to store sacks of potatoes!

However, at the end of 1967 plans were draw up to spend £70, 000 restoring it. Taking the buildings name, Parthenon, as inspiration, the idea was to transform it in to a night club/entertainment complex with a Grecian theme. Unfortunately, fate took a hand and in the early hours of 15th January 1968 a fire broke out in the greengrocers. This quickly spread to the Assembly rooms and a large part of the building was gutted, with the remainder being demolished in 1970.  A sad end for England’s first sprung dance floor.

1 Published by the Leamington Literary Society in 1977.

2 A house furnishings and carpet showroom.