You are here: Home>Locations>Leamington Spa>The Schools in War-time: Education and Evacuation

The Schools in War-time: Education and Evacuation 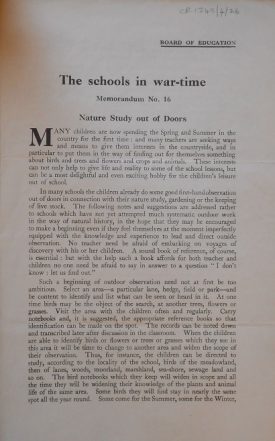 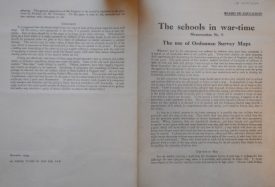 As part of the Shrubland Street School Collection1, there are a number of memoranda that were issued by the Board of Education during the Second World War. Education and ensuring that the standards and opportunities were maintained, particularly for those children who had been evacuated into settings that were very different from their previous experiences, was a key focus.

Although teaching was on the ‘Reserved Occupation’ list, there was still concerns about the effect of the war on the quantity of teachers and the quality of education available. One of the areas of particular concern was the teaching of Physical Education. Memorandum No. 23 titled ‘Physical Education’2 attempted to address that concern with practical advice.

One of the strategies for combating the lack of qualified staff appears to have been the introduction of ‘fast-track’ courses in which a person could qualify within three months. In an attempt to boost disappointing numbers qualifying through this course, the memorandum states ‘Every encouragement should…be given to suitable women to obtain the necessary qualification by attending courses designed for these purposes.’

Quality was also key. In the section ‘Suggested Modifications of Certain Groups of Exercises when Physical Training Masters are Temporarily Replaced by Less Experienced Substitutes’ it warns that ‘…exercise…unless carefully organised, may put an undesirable check on the pace of the lesson and cause it to lose its exhilarating effect’.

As I mentioned in the opening, there was a real awareness that for many evacuated children, this may have been their first time leaving the city and it was thought important to give these children a variety of experiences.

In ‘Nature Study out of Doors’3 there are a host of useful ideas for teachers for how to encourage a love of the countryside, whilst also developing children’s observational skills, because

…when work of this kind is done, starting quite frankly in the simplest way, it is generally found that both enjoyment and real knowledge result. There is a splendid opportunity for any teachers and children new to the country to make such a beginning now.

The theme that there was a lot to be gained by the children who had been evacuated was continued in ‘The use of Ordnance Survey Maps’4 which includes the statement ‘Town-bred children are daily enlarging their experiences and discovering for themselves something of the face of England – and finding it very good.’ It urged all schools to use the O.S. maps as ‘there was no other country in the world which provides its people with so cheap, so varied, and so complete a range of maps…If this sounds like idle boasting, it happens to be no more than a sober statement of fact.’

Singing was an area that the Board of Education thought was least affected by evacuation as it simply required a willing and enthusiastic leader. The suggestion in ‘Community Singing5 was that the teaching should start with songs that all the children, both the residents and the evacuees, would be familiar, but that it was entirely possible that ‘such songs as were unfamiliar to one group could soon be learnt by the other group after hearing them sung through by the former a few times.’

As with all the memoranda, maintaining standards was essential. After all according to ‘Community Singing’,

The human voice was never intended to be a “weapon of offence” – to be discharged at defenceless audience…It is good to “sing with spirit” but better still “to sing with the understanding also.”

I have also written on food production during the Second World War, and this article can be found by following the link.