You are here: Home>Locations>Rugby>The Black Path in Rugby

The Black Path in Rugby 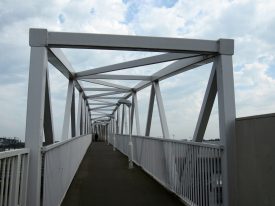 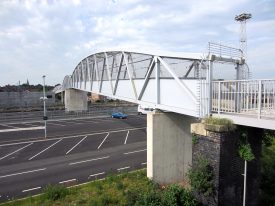 The Black Path was so called because it was originally surfaced with cinders. It was a footbridge built in the early 20th century across the railway to help workers living in Rugby reach the British Thomson Houston factory site. It was clearly where photographer Victor Long stood to take his photograph of the BTH factory.

The bridge still survives today (though rather truncated at the northern end) and I made use of it to take my ‘after’ picture of the BTH site. The path is still black(ish), but surfaced with tarmac now and metal mesh has been added to prevent things falling onto the railway. The Black Path links to the Viaduct Cycle path that makes use of an old railway line that used to lead off (skirting the BTH factory site) to a viaduct across the Leicester Road.