You are here: Home>Locations>Warwick>The Heritage Cooking Challenge: Cooking and Eating the Artichoke Pie

The Heritage Cooking Challenge: Cooking and Eating the Artichoke Pie 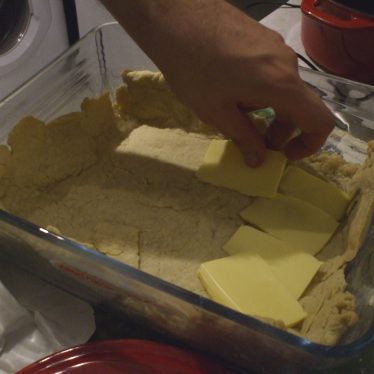 The butter goes into a rather ramshackle looking pastry base.
Image courtesy of Becky Hemsley/Ruth Long 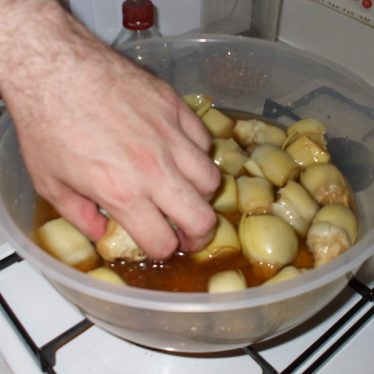 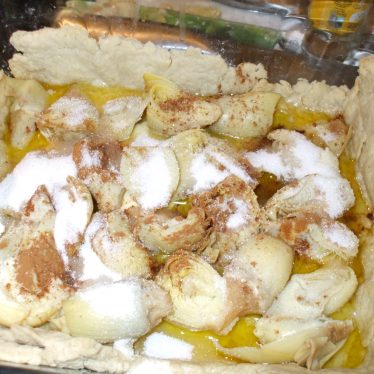 Artichokes are in, butter is melting, and now obviously it's time to layer with sugar.
Image courtesy of Becky Hemsley/Ruth Long 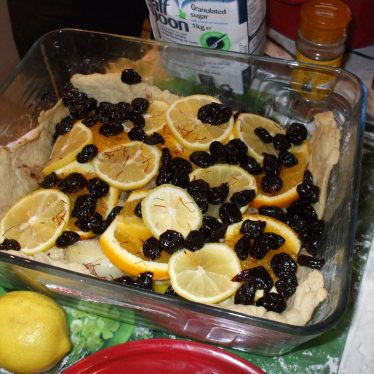 It's a citrus overload.
Image courtesy of Becky Hemsley/Ruth Long 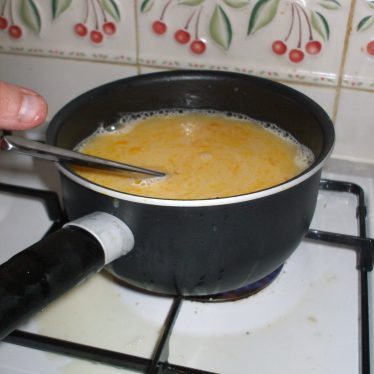 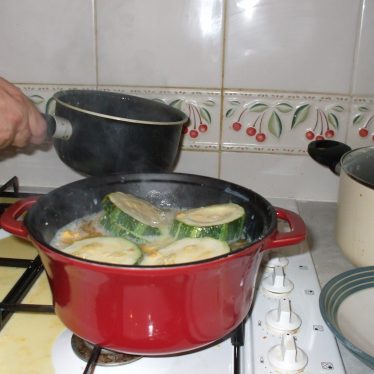 And onto the pie goes the caudle, ready for consumption. Note the spillage from the overflowing bubbling flaming suacepan of a couple of minutes earlier.
Image courtesy of Becky Hemsley/Ruth Long

So we got to the stage of making the pie…

As you may recall, one of the major challenges was hunting for the artichokes in the first place! Tinned seemed a bit of a cop out, but the show must go on. What was equally a challenge was making the pastry for the pie. Again, you may recall this was a value judgement and a bit of a challenge as, well… I just don’t make pastry. As you can see from the pictures, I didn’t necessarily bother with the aesthetics. This pastry was made by hand and done by judgement as to when the butter is rubbed in. Actually, when caked with wine, sherry, butter and the like, my effort doesn’t taste too bad. or maybe that’s just in comparison to what lies above it.

As suggested above, the recipe calls for a fair amount of butter too. After the pastry was blind baked, in went a layer of the stuff. I’m now thinking of my cholesterol as it goes in. The (tinned) artichokes have been left in sack overnight and then comes the… sugar?!?

This is where the pie just goes… weird. We’re adding all kinds of citrus things, saffron, and dried cherries. This is not pie as I know it. We’re then adding marrow, for reasons best known to a chef centuries before me. I’m known for crazy cooking efforts, but even for me this is all a little bit crazy! And that’s before we even get to the stage of throwing in the hard boiled egg yolks, and more butter too as if there wasn’t enough… and then baking. No temperatures of course so it’s my best guess of modern pie cooking; I plump for 160 degrees for 45 minutes.

My kitchen, now, is a sea of carnage. After baking it I now need to make a caudle out of egg yolks, sugar, and white wine. At this stage my two (willing? Funny which adjectives you choose at times of crisis) helpers are proving particularly useful in ensuring that I don’t take out my kitchen by setting fire to it. Not once but twice, blue flames skirt out of the caudle and start flickering up the walls. It’s nicely ethereal, but somewhat unnerving.

Poured over the pie, my creation is now complete and ready for tasting and having seen how it was created… my helpers won’t go near the thing.

Fortunately I have a (willing? That word again!) audience at the Warwickshire County Record Office, who get to taste it the following day. This is where we make our concession to modern day practices, that I can take a caudle in to work and microwave both it, and the pie in order to reheat it and serve it at the temperature intended. Actually, hold that thought. Is this a pie one was supposed to eat warm? Although the recipe says to cook it, there’s absolutely nothing that says it should be served warm, although it’s clearly implied in my view. Do, nonetheless, please let me know your thoughts.

So I’ve already had a sneak taste, and I think it’s truly disgusting! I present this pie with a sense of trepidation. The smell is sickly sweet, the taste sweeter, and I’m starting to regret not peeling the rind off the lemons and limes, although maybe baking it for longer would have helped there. It’s just a little bit hideous. So imagine my shock when response to it was rather positive! “Christmassy” was one adjective used and I suppose it is, with its alcohol, overdose of butter and dried fruit; it’s a bit like a gooey loose Christmas Pudding I suppose. Other responses? Well also favourable. I can’t help but notice some bowls are left uneaten and politely pushed to one side in the hope I can’t see the ordeal being avoided. Never fear, my victims, I’m on your side – the side that says this is badly wrong.

So it’s safe to say this was a show dish. Pop in all the ingredients that cost a lot, pop in the rarities and show off. Saffron is not cheap now, and the conspicuous consumption of sugar and citrus fruits is making a statement of intent at your banquet. You could imagine it served as part of a great feast, people tucking in alongside other finery. This is not an everyday dish, this is a dish to impress.

Well that was then, and this is now.