Survey of the Manor and Landscape of Cesters Over 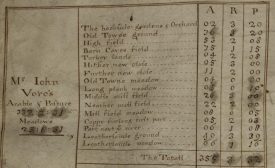 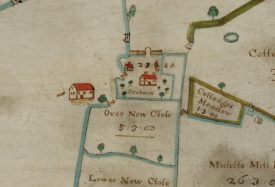 This map (by James Fish, dated 1691) outlines the lands owned by the Greville family in Cesters Over, located in the parish of Monks Kirkby, Warwickshire. The map indicates the boundaries and leaseholders of the land, indicated presumably by written labels and coloured outlines. The table in the bottom left hand corner gives the measurements in ‘A…R…P’ (Acres…roods…poles/perch) and indicates that the land in consisted of over 710 acres in total.

The manor was sold in the mid-16th century to Fulke Greville (d.1559), whose principle manor was Beauchamp Court, Alcester. The land then passed by descent into the hands of Sir Fulke Greville (1554-1628), 1st Baron Brooke, who was granted Warwick Castle in 1604. Inventories suggest that the family owned a substantial house in Cesters Over, which might be one of the orange roofed buildings in the centre of the map.

A supporter of William II

This particular map, however, was created during the ownership of Fulke Greville (1642/3–1710), 5th Baron Brooke, who was a supporter of William III and instrumental in the rebuilding of Warwick after the Great Fire 1694. Fulke hosted a visit from his supporter King William III to Warwick in 1695, and supported the construction of a Racecourse outside the walls of Warwick in 1707. Widely considered to be one of the largest landowners in the Midlands, the Grevilles during this period could boast of an annual income of almost £26,000.

The delightful and naively painted coat of arms and winged putti afford this map a simple yet effective decorative embellishment.