You are here: Home>Locations>Warwick>A Christmas Ball in Warwick!

A Christmas Ball in Warwick! 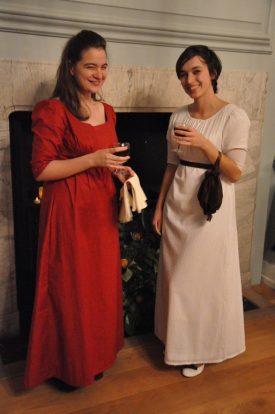 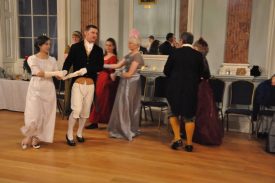 Things could get quite energetic - we would have struggled to dance every dance!
Photograph by Fran Godwin, Unlocking Warwick 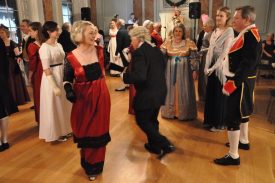 The ball attracted guests of all sorts and a merry old time was had by all!
Photograph by Fran Godwin, Unlocking Warwick

My friend and I were fortunate enough to snaffle up tickets for the Christmas Regency Ball, recently held by Unlocking Warwick in the old courtrooms on Jury Street. It was a beautiful way to get in the festive spirit – as you can see from the photographs. We’d both been avid Austen fans for many years, so it was a dream come true to experience a real life ball! (If pushed we will confess to having attempted to start a regency dancing club at school – although we only had two dancers and one pianist, so we had to substitute chairs for gentlemen… not quite as elegant as we’d hoped.)

We both knew that there were plenty of rules of etiquette at a ball (consider Mr. Elton’s shocking snub of Harriet in ‘Emma’, or Mr. Darcy’s rude refusal to dance with the country women), but I thought I’d have a quick read up before we went. In the Warwickshire County Record Office there is a booklet of ‘Rules and regulations for Southam Card and Dancing Assembly for the year 1807’  (reference CR0449/1/67a/1). I thought it might be nice to write up our experiences of the Warwick Christmas Ball, comparing it to the rules from Southam in 1807.

Firstly, the Southam Assembly required attendants to either be subscribers or introduced by a subscriber: that’ll keep the riffraff out! Ladies had to pay the steward 10 shillings and sixpence while men had to pay one guinea to be a subscriber. Luckily for us riffraff, there were no such rules in 2015 – we could just pay for tickets along with the rest of the public.

In Southam, dancing began at 7.15pm and could keep going until late into the night, with the explicit rule that no dances or games of cards would begin after 2am! Considering how tiring we found the dancing (we failed to dance every dance like Lydia did!), the idea of keeping going for so many hours is quite impressive.

One of the worries at a ball is not finding yourself a partner, but they were always intended to be very social events. In Southam in 1807, the first two dances were ‘drawn’, which randomised the partners. To stop people outright rejecting someone, if anyone declined to dance one of these dances, they were not allowed to dance afterwards. This prevented too much awkwardness – if you really did not want to dance with someone, you had to pretend that you were not inclined to dance in general so that it didn’t seem personal. My friend and I danced the first dance or two together, but very soon found friendly faces to dance with. It was lovely to be able to dance with experienced people and pick up tips to help us improve! We soon learnt to appreciate, as expressed by Sir William Lucas, the pleasures of watching ‘such superior dancing’.

But what of the booze?

‘But what of the booze?’ I hear you cry! Fear not, Unlocking Warwick were so kind as to provide us with authentic negus punch; a warming spiced drink which was very welcome when we arrived from the winter cold. In Southam, the negus punch was provided ‘for the Ladies only at the expense of the funds’, while I presume gentlemen had to pay. Perhaps a regency version of the ‘free shots for ladies’ sometimes seen today? Or perhaps gentlemen were more likely to have disposable income, but they didn’t want the ball to be short on female partners, put off by the costs.

In 1807 at the Southam Assembly there were 8 gentleman and 12 ladies subscribed and the first assembly had 16 subscribers and 17 non-subscribers. At our ball, we did find that there were more ladies than gentlemen, but fortunately we weren’t constrained by gender and I was very happy to dance a few dances as the gentleman!

There are calls for the Warwick Christmas Regency Ball to become an annual event, and the Unlocking Warwick Volunteers will be discussing the possibility in January at their next meeting. Here’s one keen convert who would love to see the event repeated!