You are here: Home>Locations>Alcester>Alcester Bank Banknotes, 1801-1802 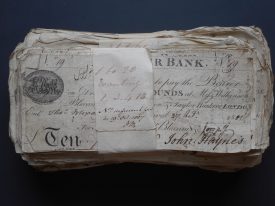 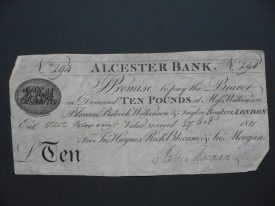 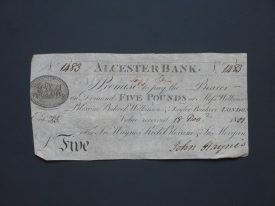 With the recent circulation of the new £10 note, we at Warwickshire County Record Office wanted to mark the occasion by celebrating another special £10 note which is held in our collections. We hold several Alcester Bank banknotes – £5 and £10 notes respectively – which are dated from 1801 to 1802. They provide a fascinating insight into the use of country banks, and the wider evolution of banking in Britain.

Today we are used to handling banknotes issued by one authority, the Bank of England, and exchanging them for other banknotes and coins. However, when money was tied to the value of gold the process was quite different. The Bank of England was founded in 1694 to raise capital for the war against France.  Like the goldsmiths and merchants in the 16th century, “the crucial feature that made Bank of England notes a means of exchange was the promise to pay the bearer the sum of the note on demand.”

While the Bank of England was an important new addition to London’s financial scene, “country banks”, Virginia Hewitt writes, “developed as an integral part of local economic growth.” They helped areas to expand, flourish, and become more accessible. Therefore, they “were often of more immediate local importance than the remote Bank of England.” They even created their own, distinct banknotes.

Continuing on the same note…

The Industrial Revolution of the late 18th and early 19th centuries caused the number of country banks to rocket, with a peak number of just over 700 in 1812. According to the Shakespeare Birthplace Trust, “‘Haynes and Bloxam’s Bank’ is recorded in the Bankers’ Almanack as having been founded in 1801 and as having failed in 1814.” It was owned by local men John Haynes, Richard Bloxam, and John Morgan. While some banks issued banknotes with ornate illustrations, Alcester Bank favoured a simpler design. The oval monogram on the left-hand side features the initials of the three bankers: HB&M. The note is made of paper and has both handwritten and printed text – for example we can see the banker’s signature in the right-hand corner, making it available for use.

If we place the 2017 note next to the Alcester one, it is very surreal to see the two banknotes side by side. The new polymer £10 note emphasises how primitive, big, and fragile the 19th century version really is. It also illustrates how far technology has advanced – the plastic banknotes have new anti-fraud features, braille for the visually impaired, and wonderful colour illustrations of the Queen and Jane Austen. All the improvements mean that the new banknote is more durable, clean, and safe.

The two banknotes also differ considerably in value. According to the National Archives’ currency converter, in 1800, £10 would be the equivalent of 2005’s £321.70. Furthermore with that amount of money in 1800, your purchasing power could buy you:

It is amazing when you compare what you can buy today for £10.

Although this document of the month may be small, it holds a huge amount of history. By studying the £10 note we can learn lots about early banking practices in Warwickshire, and further afield. Consequently, we can appreciate and celebrate both the old and the new.

This article was Document of the Month for the Warwickshire County Record Office in November 2017.  Further articles can be found on their website.