A Neolithic Polished Axe From Stratford-upon-Avon 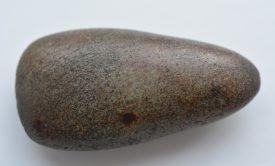 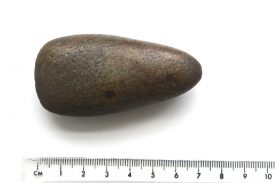 It’s amazing what comes up in people’s back gardens. This may look like a small pebble, but it was identified at Warwickshire Museum as a 6000 year old stone axe. Mr James Schofield found it in his garden in Stratford-upon-Avon, it measures just over 7cm long and 4cm at its widest.

This type of axe belongs to the period known as the Neolithic or New Stone Age; this was the time when people in this area had begun to farm the land. Axes like this were used to clear woodland for crops, and for keeping newly domesticated breeds of sheep and cattle.

Polished axes like this one are the first evidence we have of trade in the past. They were produced at large scale stone workings or ‘axe factories’. The stone was quarried and cut to the rough shape of the axe. Each axe was then painstakingly polished to a shiny surface, which would have taken many hours to achieve. This axe is made of an altered volcanic rock and may have come from Borrowdale in the Lake District or from North Wales.

Axes from specific sites have been found all over the British Isles, many miles away from their original quarry site and must have been transported on foot, or on the backs of oxen or ponies, along ancient trackways, before the introduction of wheeled vehicles.