Or lamb rissoles, as it turns out… 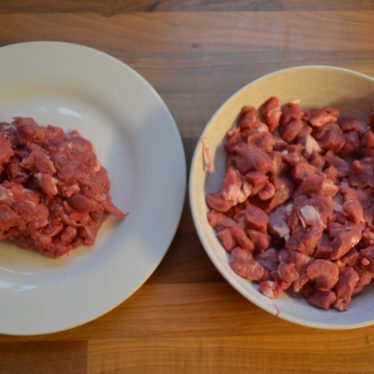 The meat before (right) and after (left) pounding in pestle and mortar.
Photograph by Becky Hemsley 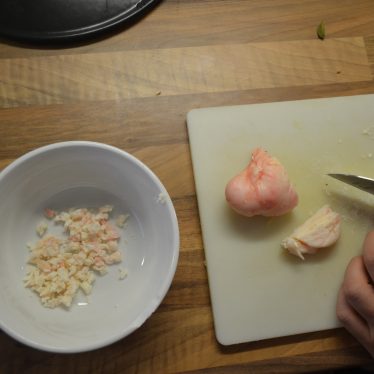 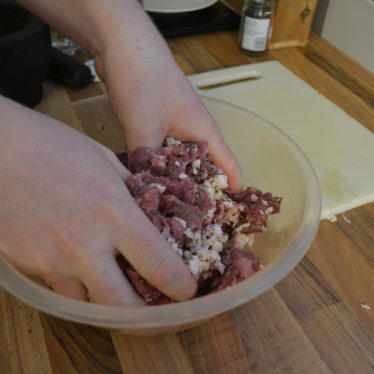 Mixing all the ingredients together.
Photograph by Becky Hemsley 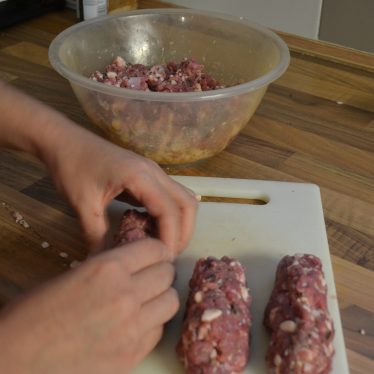 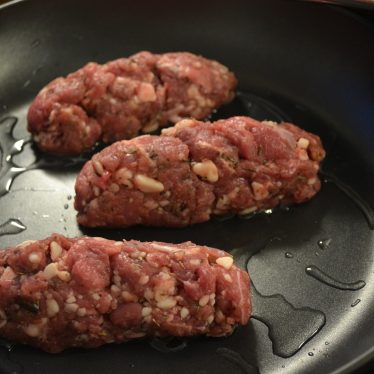 Frying the sausages in a little oil.
Photograph by Becky Hemsley 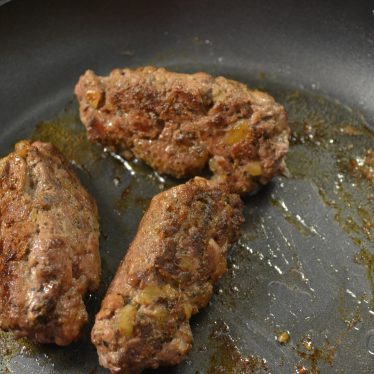 Looking delicious - the sausages all cooked through and ready to serve with gravy.
Photograph by Becky Hemsley

Having made a name for ourselves with the pickled pigeon, my partner and I decided to try our hand at historic sausage-making. This is an early 18th century recipe for mutton sausages, found in a cookbook from the very same Mary Wise. We scaled down the recipe to 1/5th of the size, and began…

We failed at the first hurdle, when our trusty butcher did not have any mutton in stock. They did, however, provide us with some real beef suet and lovely leg of lamb, making sure to avoid the ‘shinny’ part of the meat (the shank). We put the bone to one side, ready to turn into an Anglo-Saxon flute, but that’s another story…

Having got our raw materials, the next stage was to cut and ‘beat’ the meat. When we make sausages at home we have the aid of a grinder, but these were not invented until the 19th century. This was going to be a pestle and mortar job. Being somewhat trepidatious about the effort that would be required to pound the meat into a paste, we made sure to cut the meat very finely – about 1-2 cm cubes. In the end, the process was a lot easier than we expected. It was interesting that we were required to add a little suet to the mix, as all it seemed to do was stick to the pestle and mortar. We speculated that it may simply have been there to aid lubrication – an early form of non-stick?

Suet and hemp, herbs and spices

Chopping the suet was less delightful. It was membranous and a bit bloody, which was rather off-putting – it makes you realise how pampered we are with our packet mixes. We had to taint our Google history by asking how big a hemp seed is (hopefully that won’t get us in trouble!) and erred on the side of caution by chopping the suet a bit larger than that.

We then guesstimated the quantities of herbs. We couldn’t find winter savoury in any major supermarkets, but apparently it tastes somewhere between thyme and mint, so we made do with them. It was a bit of a pain grating 1/5th of a nutmeg, and there was a bewildering abbreviation in the recipe which meant we had no idea how much clove and mace to include. We guesstimated again.

Finally, we got stuck in mixing the ingredients together with our hands. The recipe calls for one egg yolk ‘to make ‘em bind’. Because we had scaled the recipe down to 1/5th the size, this meant measuring out 1/5th of an egg yolk. This seemed far too small a quantity to bind 1kg worth of meat! We made one sausage with this ratio, and then gradually increased the amount of yolk per sausage, but didn’t find it made much difference.

The recipe implied that we could ‘rowl ‘em like sausages’, but we found the mix to be too loose to roll (perhaps our pounding was not thorough enough, or the suet was too big), so we moulded them by hand. This made them more like rissoles than our modern sausages, and (to our disappointment!) there was no need to mess around with hand-stuffing sausage casings. To cook them, the recipe suggested ‘frying or boyling’ – we tried both. Frying was significantly more appetising.

So there you have it – a delicious dinner of homemade sausages, without the need for any fancy equipment. I’d definitely recommend this one, served with onion gravy and mash.