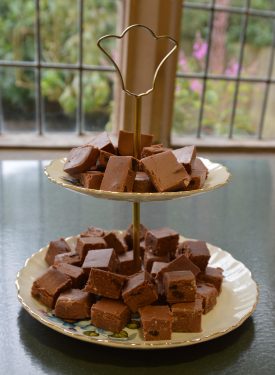 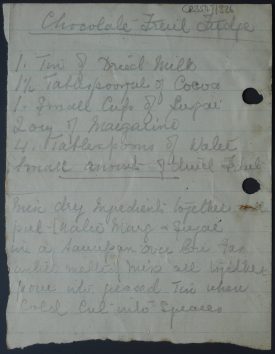 This is the second in the series of the Heritage Cooking Challenge and this month it is fudge!

The recipe for chocolate fruit fudge in the Hemming Family of Henley in Arden collection (Warwickshire County Record Office, CR 3547/326) looks deceptively simple – only six ingredients and six lines of instructions. In comparison to the first Heritage Cooking Challenge, this is also a relatively modern recipe.

But look a little closer and it’s not as easy as it looks, especially as each ingredient is measured in a different way – 1 tin, 1 small cup, 2 oz, tablespoons and, perhaps the best, a ‘small amount’.

Judging by the appearance of the recipe (written roughly in pencil on a piece of torn lined paper) and the ingredients used in the recipe, I’d suggest that it dates around the second half of the 20th century – probably 1940s going into the 1950s. The person who wrote the recipe had probably tried and tested this many times and knew the amounts needed, so these measurements would make sense to them.

The first ingredient – and sticking point – was a ‘tin of dried milk’. I could never remember ever seeing a tin of dried milk. However, it turns out you can still buy dried milk (apparently good for making bread)… but not in tins, and the container I bought looked far too big to use it all at once! So, I plumped for an average tin sized mug (about the size of a can of soup) and hoped for the best! It weighed 5oz. Thinking back, it would probably have been better to assumed 4oz which was probably more likely being a division of 16 (I’m of the mainly metric generation so I think in fives and tens and know weight in kilograms… though I only know my height in feet, and distances in miles!).

I was glad that there was a more precise measurement for the cocoa as this would drastically alter the outcome and gave me a bit of a base to go on. The ‘small amount’ of fruit I just had to guess and ended up adding a bit more once I had mixed all the dry ingredients together (minus the sugar which crops up later in the recipe).

The next step involved heating margarine, water, and sugar over a low temperature. I used block margarine rather than anything out of a tub, assuming that this would have been taken for granted at the time the recipe was written. Interestingly they have used margarine rather than butter. Arguably, the butter might have given the end product a more palatable flavour.

Along with the dried milk, which was used extensively during the Second World War and rationing period, this makes me inclined to date the origin of the recipe as being fairly contemporary to that time period: the margarine I used was in production during the Second World War, and the manufacturing company even created a wartime cookery book. Rationing was introduced in 1940 and lasted until the early 1950s. An adult’s weekly ration included 4oz margarine (compared to 2oz butter and 2oz lard), and they could have a tin of dried milk every 8 weeks. Dried fruit was also rationed on a points system.

I looked on the internet for the modern equivalent (an American cup measurement for sugar varies depending on the ingredient and its density) and this was given as 7oz. However, weighing out 7oz, this looked far too much (even more than a large mug!) and so I found something I thought fitted what could be described as a small cup. This weighed 4oz which seemed a lot better. The full adult ration for sugar for a week was 8oz so this would not be impossible (though a weighty proportion of a week’s allowance).

To read further elements of making the recipe, and the response to the taste test, follow this link.