You are here: Home>Locations>Warwick>The Heritage Cooking Challenge: A Cream With Apples

The Heritage Cooking Challenge: A Cream With Apples 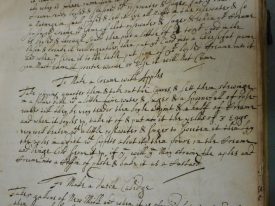 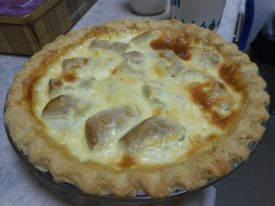 I approach this task with quite a few misgivings. I can do the silver dish (standard saucepan) and sourcing the ingredients is fine; I have apples on the tree in my garden while sugar, eggs, cream and rosewater are easily accessible. But other than knowing what quantity of cream I need, and how many egg yolks, I have no clue to how much I need of everything else, let alone what size dish.

I opt for the baked custard option (see last two lines of the recipe) as I decide it’s probably best not to serve up raw egg to my colleagues, which is ironic – clearly our forebears didn’t have to worry about being made unwell by digesting raw egg.

I start with the apples. I don’t know what variety of apple I’m growing, but figure they will be fresh and crisp, hopefully like the pippins noted above. But I don’t know whether to peel my apples – would this have been a given, or would they have thought peeling apples wasteful? This leads me to ponder on all the knowledge and skill cooks in kitchens of well-to-do families would have had. I opt for leaving the apples in their skins, but quarter and core as directed. I don’t do this very carefully, and it’s only as I’m arranging the apples later that I think that as a dish for a distinguished household, I wouldn’t be serving up half mangled apples.

Apples go into the pan, but exactly how much is a ‘little faire water’? I decide upon about an inch deep in the pan, with a teaspoon full of rosewater and a small quantity of sugar, and then cover the pan. It smells delicious as the apples begin to stew. I probably over stew the apples – they are softer than the ‘tender’ direction implies.

On one point I am decided – I’m not going to boil the cream. It seems madness to add boiling cream to beaten eggs – thinking this would lead to a scrambled egg mess amidst unctuous cream. I beat the eggs with the rosewater and sugar, and am reassured as I can’t go too far wrong on this point… although I’m itching to add cornflour, but resist the temptation. I add the ‘hot’ cream, there’s a huge quantity. I can’t see how it will set (and this does become a sore point later) so don’t add it all.

I haphazardly arrange the strained and fast dissolving apples to the bottom of my pastry filled dish. I strain the cream/egg mixture over the top. I still have far too much cream for the size of my dish, but the cream doesn’t entirely cover the apples (note to self, needed to do much larger and deeper dish).

Why are we waiting?

I then place it on a gas mark 2 oven and begin to bake… and bake…. and bake. The surface is putting in an attempt to set, but the cream below keeps making a break for it. I turn up the gas. Another half an hour or so later I give up.  What will be will be. I abandon it on the side in the kitchen to cool and go to bed, but get up at 5am to put the dish into the fridge.

Unbelievably, it has set by the time it is served up to willing victims the next day. For my part I like the rose flavour, and the apple, but ultimately find it a little bland.

If I recover enough, I might try this again but with some tweaks. I’d  thinly slice my apple and layer it as the French do for their apple tarts. I would use cornflour – why not! And I might even attempt to boil the cream, possibly leaving out the rosewater and adding vanilla instead.