You are here: Home>Locations>Warwick>The Heritage Cooking Challenge: A Carrot Pudding 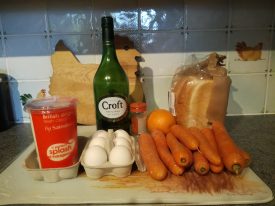 Carrots... ready for the off! Along with some other ingredients to stir in, not to drink.
Image courtesy of Carolyn Ewing 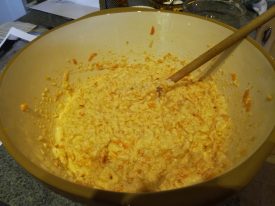 Ingredients duly being stirred in, not drunk.
Image courtesy of Carolyn Ewing 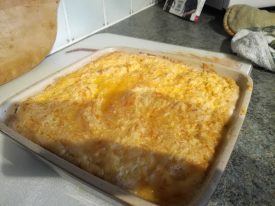 The finished pudding, ready to be met with gasps of apathy.
Image courtesy of Carolyn Ewing

In keeping with a seasonal theme, what could be better for a cold winter’s day or night than a slice of Carrot pudding from an 18th century recipe? The recipe belongs to the Waller collection, held at Warwickshire County Record Office.1 Again, what seemed quite straightforward to start with, seemed to raise many “er what?” moments.

“Take a stale peny loaf.” I am not entirely clear what this would be as it seems to have been a small loaf. I did find an incredibly complicated formula based on the price of wheat as to what a loaf should weigh. However, I took a simplistic line and plumped for a small tin loaf.

Then “half so much carrot boyld tender”. I assumed that this meant half the volume rather than weight, otherwise there would be a lack of carrots actually in it, especially in view of the requirement “to put to it 8 yolks of eggs..”. I really struggled to find orange flower water and thus needed to replace this with orange rind, having discovered that, according to Nigella, this works. I assumed that sack did not mean a bit of rough old hessian and hoped that dry sherry would do the trick.

Not a dish for the faint-hearted

All other ingredients were pure guess work, sugar, and grated nutmeg.  I wished I had put more nutmeg in as it got a little lost wallowing in a “pint of creame” and half a pound of melted butter.  This is not a dish for the faint-hearted.

After much beating and stirring the mix was stodgy to say the least. Or should I have used less bread and carrot so that it was more of a custard? This is where I wish I were a better cook, as do my colleagues.  Anyway in the oven it went.  As usual, no guidance on heat so I plumped for middle of the range. After three quarters of an hour (yes I did forget about the time) I had a baked stodgy pudding.

Mixed. Some thought it should have stayed in the 18th century, some were too cowardly to try it, some got a pleasant surprise that it wasn’t quite so offensive as first thought, some thought it was interesting, and I think that probably says it all!