You are here: Home>Locations>Warwick>Heritage Cooking Challenge: Honey, I Drunk the Mead 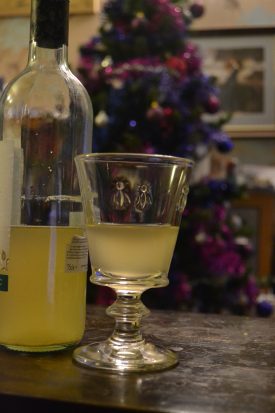 A festive homebrew mead, from a historic recipe from the Waller collection.
Photograph by Beck Hemsley 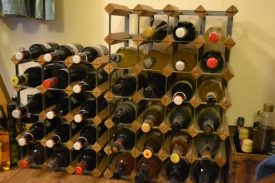 The mead takes its place on the wine rack, to lay down for a few years
Photograph by Beck Hemsley

Having done our prep, we started the mead-making process in earnest. This will be fairly familiar to anybody who has made wine before, so I won’t go into detail here, but have a look at the recipe attached below.

Without access to a modern thermometer, the recipe-writer says to let the mead boil ‘till it’s clean without Scum’. It was exciting to see that this actually worked – it was very obvious when the mixture was ready to transfer into ‘a vessell fit for it’. We had to use a lidded bucket, since we couldn’t float bread in a demijohn. We were concerned that the bread itself might introduce infection, as we couldn’t really sterilise it, but it served its purpose well.

The recipe called for ‘races’ of ginger, which is apparently a root of ginger. It seemed like a lot, and we wondered whether the ginger they harvested was smaller in those days? The recipe wasn’t clear whether to remove the ginger after boiling, or leave it in the fermenting mixture, so we floated the bag of ginger for a couple of days before removing it, by which point it had already worked its wonders – the smell was magnificent.

We then strained out most of the mixture into a demijohn, and the rest into bottles. Since we knew the mead would still be fermenting (and thus releasing carbon dioxide), we made sure to leave the bottle lids slightly loose. We also tried the trick of putting a balloon over the top, which allows the excess to escape without letting any air in (which can introduce infection and possibly cause the wine to turn to vinegar).

The taste of success

After a week, still bubbling and with the yeast still floating like ‘white feathers’, the mead was apparently ready to drink.

Obviously, staff at Warwickshire County Record Office can’t drink on the job, so instead we shared a bottle with a few friends. We enjoyed it so much that we ‘accidentally’ opened another. It was sweet, refreshing, warming, with an exciting zing from the fizz. The spices made it a perfect Christmassy treat. The main flavour was ginger, which we might have overdone, since the subtleties of the honey were somewhat overwhelmed. We’d probably scale back the ginger next time, or see how horse-radish changes things.

It seemed to be like a cider in terms of alcohol content (although didn’t taste alcoholic at all) and eminently drinkable, a bit like ginger beer. Although if you have too much then the bubbles can go to your tummy. It’s definitely an exciting option to add to our home-brew repertoire. Got a party in two weeks? Just brew up a batch of this, jobs a good ‘un!

But how does it stand the test of time? If you’ve got any left after the party is over, will it last?

The test of time

Having resisted the temptation to finish off the batch, we thought it would be interesting to taste the mead after it had been left to ferment out into a stronger wine-style drink. It took a good three months to finish fermenting but it cleared beautifully.

This time, it inspired mixed opinions. Again, the strongest flavour was ginger (even more so than before). Although there was an underlying honey flavour, it was very subtle. It had a fiery aftertaste and, being a fan of whiskey, I enjoyed it a lot more than my partner did. I can imagine it’d be very comforting if you were down with a cold. It was definitely drinkable, although we might suggest adding sugar to taste. It was also an improvement over other mead recipes we’ve followed. This impressed me, since I expected modern home-brewers to have had more time to improve their recipes.

It deserves a couple of years to age, and I’m looking forward to opening this up once it’s developed and matures. I anticipate it will be a very worthy mead.