You are here: Home>Locations>Leamington Spa>George Withers - A Conscientious Objector in Leamington 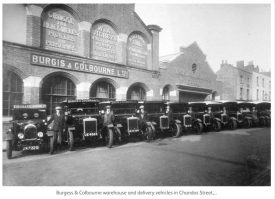 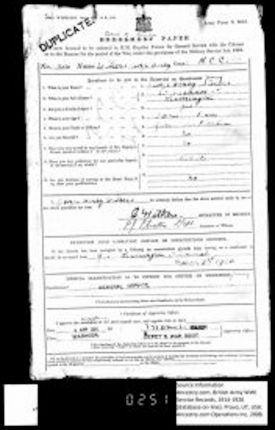 George Henry Withers moved to Leamington in 1916, after a childhood in Weston Super Mare.  Before moving to Leamington he had a range of occupations, including a grocer’s assistant in Havant, Hampshire, and a ‘fly proprietor’, operating a fleet of one-horse, two-wheeled carriages for hire.   Upon moving to Leamington he worked for grocers and general store, Burgis and Colbourne Ltd, finding a place to live opposite the company’s warehouse on Chandos Street.

Conscription during World War One

World War One broke out in 1914 and, when conscription [the compulsory enlistment of men to fight in the Armed Forces] was introduced in 1916, retail workers were the second largest sector of workers in Warwickshire to submit  appeals to the Tribunals, with most of these coming from Leamington Spa.  Although Burgis & Colbourne made appeals for five other men in their employ, there is no record that they did this for George.

George made an application to the Leamington Spa Borough Local Tribunal for an absolute exemption from military service in March 2016, stating that he was opposed to taking part in war or warlike preparations, taking human life and taking the Military Oath. The Leamington Tribunal eventually ruled that George was exempted from service as a combatant but ordered to take up non-combatant duties instead.  He was assigned to the newly-formed Non-Combatant Corps (NCC), which at that time had its headquarters in Warwick. George’s subsequent appeal against this decision was over ruled.

George was posted as a private with the Non–Combatant Corps, Service Number 354, on 4th April 1916.   His Enrolment Form  was hastily amended to become his ‘Record of Service’.  He was classified medically fit for general service.  After only a few weeks he was posted to France, possibly supporting the build-up of British and French forces prior to the Battle of the Somme a few months later.

As a private in the NCC, George may have had a difficult time of it.  Conscientious objectors declined to fight, but were expected to obey orders.  Some found they could not accept military authority and ignored or disobeyed their orders, leading to courts martial and imprisonment.  Back in England, commentators viewed the corps with disapproval, with the press describing them as the ‘No Courage Corps’.   However, George’s conduct in service was reported to be good, and his work would have been confined to field engineering, transport and logistics.

Perhaps because of the generally negative view of the corps, there are no war diaries or operational records surviving for these units, and knowledge of their activities is limited.  George continued in service for one year and 156 days, until he was discharged as medically unfit for service after an accident.  His pension record shows that he suffered a broken leg, and displayed symptoms of neurasthenia, similar to chronic fatigue syndrome.  Due to the lack of records it is impossible to know the details of what happened, but George was eventually discharged on a pension back to his old family address in Weston-Super-Mare.