Reading the Revolution: The Other Branch, Leamington's Radical Bookshop 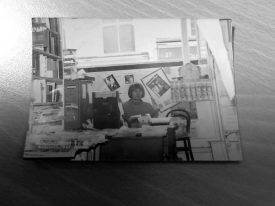 'sexist and materialistic... without any artistic merit' - scathing reviews of an unwanted publication!
Warwickshire County Record Office, ref. CR3541/Part I

Bibliophiles would be proud to proclaim that the book has always been a carrier of change, insight and innovation. Books are a powerful medium for the transmission of ideas. Books change the world. Where better to find the frontline of revolution than in a bookshop?

Leamington Spa was home to just such a place in the 1970s and 1980s. The Other Branch was a radical bookshop, run by volunteers, which began life at 42 Bath Street in 1972 before moving to 12 Gloucester Street in c.1987.

The former bookshop owner has written an article about the shop in the magazine Leamington Spark, which emphasises the community and vivacity of The Other Branch and the ambition of what they were trying to achieve. Apparently the shop was ‘born out of the idealism of the late 1960s and early 1970s, when the opening of Warwick University brought an influx of staff and students into Leamington.’ You’ll notice he mentions their ‘Day Book’, which contained notes from the volunteer staff to each other. Fortunately, those Day Books have not been lost, but are preserved for future generations in the Warwickshire County Record Office, under reference CR3541/Parts I-III. The more recent Day Books are unavailable for general access, as they are under 35 years old. However, those from the early years (1974-1981) can be accessed by the public.

‘Gay Lib aren’t as shy as they were’

These books provide a fascinating insight into the workings of the shop itself, as well as being a day-to-day source for cultural shifts and the experiences of those elements of society which the 1970s may have considered ‘radical’.

For example, in a note on May 7th 1976, someone mentions that ‘Gay Lib[eration] aren’t as shy as they were, why can’t they have a shelf’ instead of squeezing them into the politics shelves, to which someone notes ‘I agree’. The notes record the sale of tickets to gay discos, liaisons with environmental vegan groups, critiques of magazines and literature. On June 8th 1976, someone writes: ‘mentioned the Carnival of Racial Harmony at Parish in Council meeting at St Peters R.C. last night, caused an uproar. Many thought that… joining in would be misinterpreted as favouring abortion!!’

Not all of the notes are ‘radical’ in themselves, but more often they reflect the everyday concerns and challenges of an ordinary bunch of people. For example, one person enthusiastically notes in June 1967 that ‘it’s so sunny now… I think we should change our opening hours to catch the sun!’, to which a less-enthusiastic response reads ‘I’m trying to avoid it at present’. Things could go wrong, as on October 6th 1976, when ‘the stunningly efficient ordering system collapses into a whimpering heap’! And customers could be less than appealing, as on January 29th 1967: ‘not a very inspiring day – very quiet except someone who rang up most anxious to get a copy of ‘Inside Linda Lovelace’ – YUK!’

The history of the marginalised

The Other Branch was part of an activist movement which sought to shake cultural structures to their core; it shaped and reflected that movement (which is still developing and ongoing today) and its records can help us understand that movement. These documents are an important record for those histories which can sometimes be overlooked by the more ‘official’ documents and sources. We all know the phrase ‘history is written by the winners’; broadly speaking, older historical documents have been created by and about white heterosexual cisgender able-bodied class-privileged men. Recently historians have been endeavouring to write marginalised groups (women, the LGBTQ+ community, Black and Minority Ethnic groups, people with disabilities) back into the history books. The preservation of records like those of The Other Branch, which actively spoke for and about such groups, is an important step in ensuring that they do not remain marginalised!