You are here: Home>Locations>Leamington Spa>Stone Jugs From the Royal Dairy

Stone Jugs From the Royal Dairy 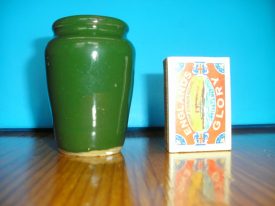 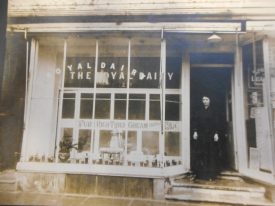 My parental grandmother Elsie Agnes Mary Jakeman on the steps of the royal dairy around 1910. Jars such as the green jar in the other picture can be seen in the window.
Image courtesy of Richard Neale

When I was a child my father was a partner in a small general building firm.  As well as various, what would now be classed as ‘DIY’ jobs, they were often employed by a property developer/landlord friend to renovate properties.  It was often the case that these properties hadn’t been lived in for a while and sometimes contained all sorts of things that these days would either end up in a skip, at the charity shop or on eBay! However, in those days it was a case of either getting a house clearer to call or taking it the tip or as they called it then, ‘The Destructors!’

One such property was in Highfield Terrace in Leamington.  Judging by the ‘treasure’ my sister and I found in the attic and cellar it must have at one time been the home of a coachman from the days when most transport was horse drawn. Although, we were allowed to bring home some of this ‘treasure’ we were banned from filling the house with too much old rubbish.

In the cellar of said house, amongst other things, we found some boxes full of little stone jugs/jars that cream was sold in before the days of refrigeration. I did manage to smuggle some of these past Dad to add to my collection of ‘treasures’.

One of these jars, a little green one, had Royal Dairy Leamington printed on the bottom. I took this to show my Gran, who then produced a photograph of herself stood on the steps of the Royal Dairy where she used to work before the First World War. She told me that the little green jars cost 3d (1p) and that there were also bigger ones that were blue and cost 6d (2½p)

The first mention of the Royal Dairy

The Royal Dairy was at 99, Warwick Street and first appears in the street directory for 1901.  As there is no mention of number 99 in the directories for 1899 and 1900, it is probably safe to assume the Royal Dairy opened for business in late 1900.  In 1898 the shop was the premises of a watchmaker, B. Swiecicki.

Using a combination of the surviving street directories and the electoral rolls I have been able to piece together who owned the Royal Dairy and when.

99, Warwick Street is today (2019) the home of the Leamington Wine Company.