You are here: Home>Locations>Leamington Spa>Colonel John Machen, a Lillington and Leamington Life 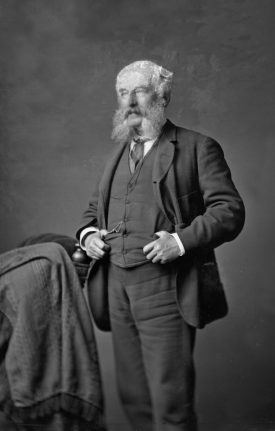 John Machen was born in Scotland, the son of a Glasgow merchant and magistrate.  He became a surgeon by profession, and started in practice in Dartmouth, Devon.  On 8th August 1852, at St Petroc’s Church, Dartmouth, he married Ellen, widow of Robert Glason, late of H.M. 62nd Regiment of Foot and Upper Tooting. They moved to Leamington, to Lillington Lodge, close to Arnold Lodge on Kenilworth Road, where they remained for the next 30 years.

In Dartmouth, John Machen had been an energetic supporter of the Volunteer movement, and in Warwickshire he played a prominent role in raising the 10th (Leamington) Warwickshire Rifle Corps in 1860, becoming its first Captain. On his retirement from the Volunteers on age grounds in 1884, he was elected its Honorary Colonel.

He qualified as a magistrate in 1860, and chaired the Kenilworth Petty Sessions, held at Milverton, from 1879.  John Machen was also a well-known freemason, holding a number of masonic offices over the years. He was one of the subscribers to the Pump Rooms in 1861, and was also deeply involved in the running of the Warwick Board of Guardians, the Income Tax Commission, the Warneford Hospital, and the Dispensary.1  For a number of years, he chaired the Lillington Local Board, where he sat from 1860 until his death, and was a Churchwarden at Lillington Parish Church.  In 1869, he was secretary of the North Warwickshire Hounds, and submitted an appeal to the Leamington Courier, for subscriptions (maximum one guinea), to a testimonial for Mr Oswald Milne on his retirement from the Mastership of that group.

In December 1861, following the death of Prince Albert, a meeting was convened to discuss an appropriate memorial for the town of Leamington.  John Machen was unable to attend the meeting, and with his apologies, he sent his recommendation that if Leamington were to raise a subscription in the Prince’s memory, an appropriate use of the funds would be the repair of the church or the baths, and that a special portion of either building should be dedicated to the late Prince – an idea well ahead of its time, but not one which received much publicity.

When John Machen died in November 1887, amongst tributes to him and his outstanding range of achievements, it was noted that a ward at the hospital was named after him, (there is still a Machen Ward at Warwick Hospital) and that his life in Leamington had been dedicated to the benefit of its townspeople.  Two stained glass windows were erected in his memory, each showing St Luke.  The first, at the Warwick Union Chapel, was funded by the Guardians and officers of the Union, and dedicated to the memory of Colonel John Machen, J P, Chairman 1884-1887.  The second was at the Warneford Hospital Chapel, and showed St Luke bearing a scroll with the text, “He giveth medicine to heal their sickness”.  At the foot, a brass plaque bore the inscription

To the memory of Colonel John Machen, JP, DL, President of this Hospital, Chairman of Committee, 1871-1877. This window is erected in token of esteem and affection by his colleagues on the Committee, April 1888

A larger funeral than planned

John Machen intended his funeral at Lillington Parish Church to be a brief, unceremonious event, but was attended by all the good and great of the district, demonstrating how widely he was known and respected by politicians, members of the nobility, clergy, his fellow aldermen, Volunteers, churchwardens, magistrates, bankers and tradesmen.  He bequeathed £105 (almost £10,000.00 today) to the vicar and churchwardens of Lillington, “the income to be applied for the benefit of the poor of the parish.”

His wife Ellen died three years after her husband, almost to the day, and is buried with him in Lillington Churchyard, to the west of the Church.  Little is known about Ellen, other than by her will dated 20 February 1888, she left £500 (approximately £45,000.00 in today’s money) to the vicar and churchwardens of Lillington, to be invested and used in the same way as her husband’s legacy.

1 In addition to these activities, he was also an honorary auditor of the County Council Treasurer’s accounts in 1861, and in 1863, was one of five justices of the peace who signed a document requiring the county council to enforce the Highways Improvement Act in the Warwick and Kenilworth District. He supported the establishment of the School for Cookery, at the Albert Hall, Kenilworth Street in 1876, where he was listed as a patron alongside Lord Leigh, Sir Eardley Wilmot, M P, Dr Jephson and Mr Wise of Woodcote amongst others.

An edited version of this article has previously appeared in St Mary Magdalene’s Church magazine, and in a Lillington Local History Society newsletter.