You are here: Home>Locations>Warwick>Classical Splendour at Warwick Castle

Scipio Africanus, Thorvaldsen and the Earl of Warwick. 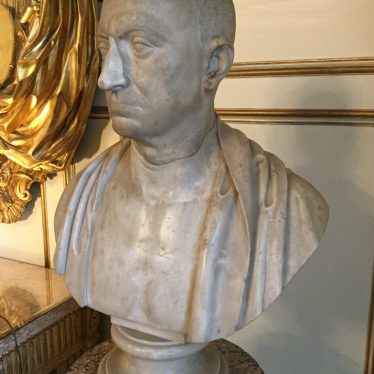 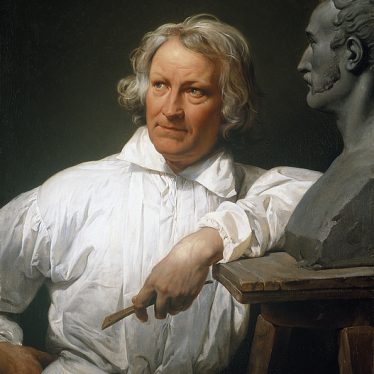 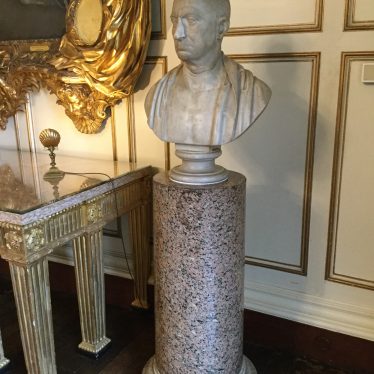 Although the fall of the Roman Empire was centuries ago, its cultural legacy has always provided inspiration for politicians, philosophers, historians, artists, architects, poets, and romantics. Despite the Saxon origins of Warwick, the town is absolutely filled with architectural references and ghosts from the classical world. Georgian artists and architects achieved new heights in the classical style, a tradition which they did not consign solely to museums (as we often do today). Stand and marvel at the elegant decoration, design and proportions of the quartet of classical-baroque buildings that adorn the corners of the old High Cross in Warwick, and equally Sanderson Miller’s remodelling of Shire Hall. For the educated Georgian the classical tradition was a living tradition, a culture which they saw themselves as the inheritors of. Defending the splendour of classical architecture Alexander Pope famously wrote:

You shew us Rome was glorious, not profuse,

And pompous Buildings were once things of use.

Warwick Castle in the 18th and 19th century was a home to an outstanding collection of classical art. George Greville, 2nd Earl of Warwick, was able to purchase significant antiquities through his extraordinary uncle, Sir William Hamilton. It was through this connection that the Earl managed to purchase the ‘Warwick Vase’, a piece of antiquity so highly regarded that copies in silver, lead and stone can be found across the globe.

The Warwick Castle archive held at the County Record Office is filled with reminiscences of the Earls’ outstanding collection of antiquities. I recently came across a set of unrecorded documents which unveils new light on one such classical treasure. In the State Dining Room of the castle is a set of classical bust portraits, two out of three of which date to the 1st-2nd century AD.1 Standing on a granite column is a marble bust of Scipio Africanus, the great General who defeated Hannibal at the Battle of Zama in 202 BC. It was purchased by Henry Richard Greville (1779-1853), 3rd Earl of Warwick, during his European Grand Tour during the late 1820s.

I recently unearthed the unrecorded original receipt for Scipio’s bust underneath a pile of later documents. It indicates that the fragment was sold to the Earl by Antonio Gastaldi in Rome on the 21st May 1829 (no price is indicated). Gastaldi, a dealer based in Rome during the early 19th century, is known and recorded to have sold several pieces to the Vatican Museum.

When looking at Scipio it is immediately obvious that it has been restored from an original fragment, probably damaged at some point during its long history. The demand for ‘complete’ rather than fragmentary sculptures meant that originals were often altered by their later owners to make them suitable for display. Similarly, many of the full armours in the castle are composite and produced with fragments of varying dates and ages.

One of the greatest 19th century artists

Another unrecorded letter has unveiled new light on this ancient work of art.2 Indeed, the Earl’s bust of Scipio was restored by none other than the Danish neo-classical sculptor Bertel Thorvaldsen (1770-1844). Often remarked as one of the greatest and most internationally famous artists of the 19th century, Thorvaldsen produced artworks for the likes of Napoleon, the Pope and many of the Royal families of Europe. It is very likely that the Earl of Warwick had visited him in his studio, a popular pastime for grand tourists passing through the imperial city. After having spent most his life in Italy, he returned to Denmark in 1838 as a national hero, and a museum in Copenhagen was planned to house his works.

We have the pleasure to acquaint you that Chev. Thorvaldsen having finished the necessary repairs to your Bust of Scipio we have paid him in his demand 35 Louis d’or, and with the expenses c… as per note we have drawn £43 17s … on your Lordship’s account.

It is also clear that Thorvaldsen had offered to help find a missing mask from the Warwick Vase (itself a concoction of different original fragments):

Since your Lord’s departure from Rome we have not heard anything on the subject of the mask – missing in the celebrated Warwick Vase, and we conclude was merely an idea of a little old dealer in antiquities that the missed object could be found, as we couldn’t obtain any notion after the many enquiries which we have made in the purpose.

It is clear that Thorvaldsen would have designed and carved the lower portion which joins onto the neck, showing the warrior wearing a cloak. The nose too, which is very obviously attached to the original white marble, must have been part of his campaign of restoration. It seems remarkable that such a famous artist would have been entrusted with such a commission; yet, the continual demand for such work from wealthy patrons would have had its own benefits.

Scattered through the staterooms

The bust of Scipio wasn’t the only piece purchased at this time.3 Many of the other classical sculptures, busts and carvings purchased by the 3rd Earl remain scattered throughout the castle’s staterooms. Although living contemporary artists and curators like to imagine that they invented the idea of creating ‘tension’ by displaying works of art from different periods, the abundance of classical artworks within a medieval gothic castle would have certainly created a similar effect. For the Georgian Earls of Warwick, history was not only bound to the dates of their medieval castle – but spanned far beyond it.

1 The others are of Emperors Trajan and Augustus.

3 Also purchased during this period were the Grimani Tables, sold by the current owners of Warwick Castle, Sotheby’s, London, December 10 2015.

Linkedin
More from Warwick
More from Public Art and Sculpture