You are here: Home>Locations>Nuneaton>Nuneaton Bus Overturns 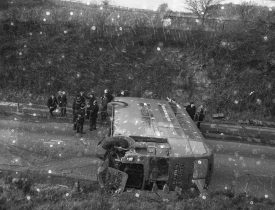 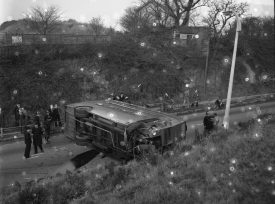 These photos have suffered from the ravages of time, but do show that Reg Bull was always on hand to capture Nuneaton moments and events, of all significance. Here, we see an overturned bus, the aftermath of an accident.

In collision with a motorcycle

On the 19th November 1957, the Nuneaton Observer reported 21 injured when a double-decker bus overturned in Griff Hollows, Nuneaton, after being in collision with a motorcycle. The motorcyclist later died.

Following the crash the injured were laid along the roadside and then taken to Manor Hospital, Nuneaton, by ambulances from Nuneaton and Bedworth. A fireman commented “It was like a battlefield.”

Blocked for three and a half hours

Having blocked the road for three and a half hours, the bus was dragged on its side for 150 yards to the bottom of Griff Hollows to then be righted and towed.