You are here: Home>Locations>Coventry>May 16th 1987. Coventry City's Cup Final, and the Victory Parade

May 16th 1987. Coventry City's Cup Final, and the Victory Parade 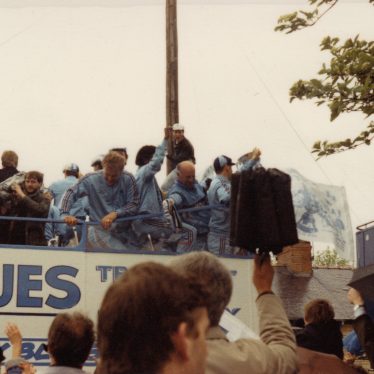 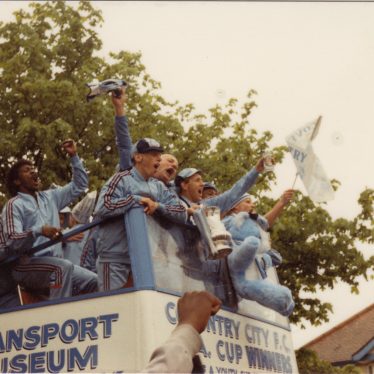 The FA Cup proudly on display, May 17th 1987.
Image courtesy of Caroline Sampson 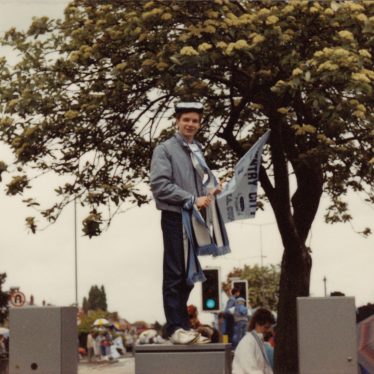 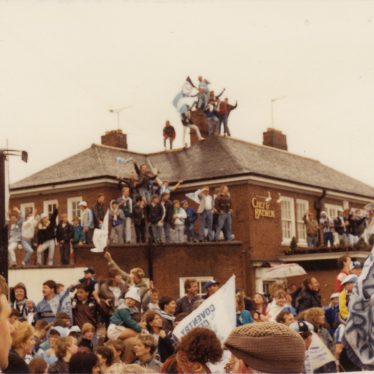 The Wyken Pippin is overloaded with people for Coventry City's victory parade, May 17th 1987.
Image courtesy of Caroline Sampson 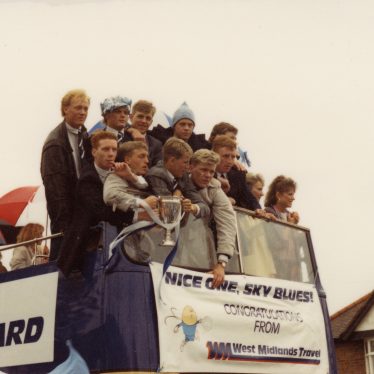 The City youth team also won their cup in 1987. Here they are on the parade.
Image courtesy of Caroline Sampson 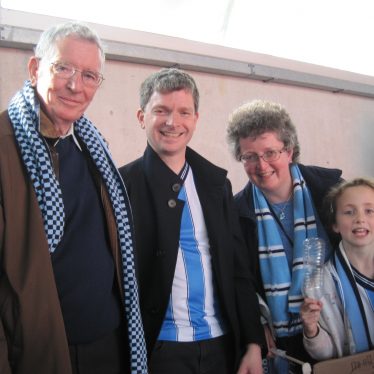 We’d got our tickets, we got the train down to Wembley. We arrived at the station and were pleasantly surprised by how relatively calm it was. What we hadn’t realised was that there was a queue miles long already looping round the side of the station!

Arriving at Wembley was unforgettable. It was the flags. I think I cried! We were on the terraces and when you looked across in any direction, all you could see was an absolute sea of blue. I think one of the commentators on telly remarked on there being more City flags than for any other cup final team. I’d gone armed with a sky blue toilet roll, and not being very practised in these matters, when I lobbed it, it didn’t unravel and clonked some fan in front of me on the head!

Once the match kicked off, I remember the feeling of yelling my head off and not being able to hear my own voice. It was so loud that you felt your own voice was just lost in this huge swell of sound. Uncle Graham had another bad feeling two minutes in (inevitably!) but City played their hearts out and I don’t think at any point did I feel we were doomed. People talk about that feeling of “when your name is on the cup…” and it really did feel like that.

And it was such a great cup final. Best ever. My housemates in Leeds told me afterwards that they had all watched it, even though most weren’t hard core footie fans and that they had been totally bowled over by it. I remember seeing Snoz and Curtis dancing on the pitch at the end, Killer lifting the Cup high and baring those teeth in the biggest grin you’ve ever seen. Houchen’s goal. Yelling the lyrics to “Go For it City”. Hardly being able to walk on the way back to the station because I lost the use of my legs through sheer overload of emotion. I will never, ever forget it.

We went to the parade on the Sunday along the Ansty Road again. It felt unreal, and the hysteria started all over again due the numbers of people. People on the roof of the pub, people climbing traffic lights, people mobbing the buses. And after that I had to go back to Leeds to start my finals the next morning. It was my Italian oral exam. I was still hyper so went in dressed pretty much as I did to go to Wembley. I’d rehearsed a few choice sentences about why I was dressed this way, and the examiners completely blanked it and made me wibble on about Dante instead! Gits!

30 years on from that memorable day, Dad, Chris, my cousin Andrew and I were back at Wembley again for the Checkatrade final. This time we did what lots of other people did and introduced a new generation to the manic excitement of a Wembley final as we were joined by my niece Rebecca and her awesome banner.

Although the occasion was different, it was so emotional to be back and the ghosts of 1987 were all around. The team and club have had such a rough time in recent years that it’s been hard at times to remember just how it feels to be in a massive crowd, all roaring and cheering and feeling part of something huge. It was an absolute pleasure and a privilege to live through those immortal weeks of 1987.