The end of Banner Lane, 2007.
Image courtesy of Dave Gleed / The TR Register 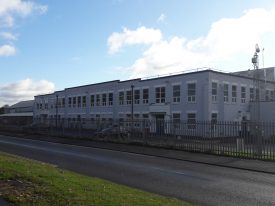 Recently in Coventry I happened to pass the old Banner Lane factory. It has now been demolished. It was built at the outbreak of the Second World War, as a shadow factory on the outskirts of the city. The Standard Motor Company built aircraft components, gun turrets etc. after the war it became the Ferguson tractor plant.

Ken Richardson set up the original Competition Department there, later to move to Allesley Service Department. I believe a number of the first TR2s were built at Banner Lane. I managed to take a shot of the front of the office block, before it disappeared.

Another manufacturing plant was in Torrington Avenue – Herald, Vitesse, and Spitfire bodies were made there, and also the Leyland two tonne trucks. It is now occupied by Peugeot’s Spares Division. Also in Torrington Avenue is possibly the only building left sporting the Triumph logo above the main entrance. It could be going back to Mayflower – Renown – Roadster origins, I am afraid I don’t know. I feel I must mention our wonderful motor museum in Coventry, worth a visit, with lots to see of interest, and it is free. Not long ago we enjoyed a lovely day when TS1 and TS2 came together at the museum. It was nice to meet our old friends Joe and Dotty Richards (TR2 – TS1) from the USA. A lot of features on the car are still original, such as sand cast hinges etc.

Another building I feel I should mention is the Triumph Service Department situated on the A45 Birmingham Road, where it all happened as far as I was concerned. This building was very attractive, having a semi Art Deco frontage, and was known locally as the Model Garage. After Triumph closed down it was later taken over by Lotus as a research and development facility, but I spent most of my working life there. I loved my job, working with a great bunch of lads. It was like being in the army again, a band of brothers. I mean, you spend more time with them than with your wives.

This is part six of an abridged version of an article that appeared in TR Action, the TR Register magazine, in 2007-2008. Further information can be found on their website. For the full article, please contact them.