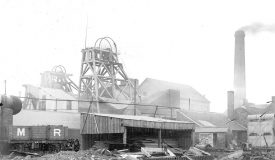 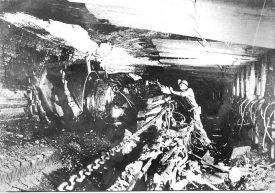 The name Birch Coppice takes its name from the original site which was a woodland area in the estate of the Earls of Beauchamp of Madresfield Court near Malvern. Although the colliery had always been called Birch Coppice, it was known locally as Hall End. Coal was being worked in this area as far back as 1850 originally under the joint ownership of Messrs Shaw and Caldicott. In 1870, capital was put into the venture by Mr Arthur Morris, who became a major shareholder. This capital was to finance the completion of the Birchmoor Pit. Around this time a brickworks was started at Hall End to utilise the good fireclay which would have otherwise been discarded.

The Birch Coppice Nos. 1 and 2 shafts were sunk in 1875. Most of the bricks used to line the shaft were manufactured at the onsite brickworks. A third shaft, Wood End, was sunk between 1911 and 1914, and from 1918 was used for pumping, ventilation and manriding.

Coal output at Birch Coppice Colliery came to a standstill in 1910 after lightning struck the wooden headgear and started a fire that was fuelled by the grease and oil that had dripped onto the woodwork from the bearings. The headgear was deemed unsafe, and all coal production stopped while a new steel headgear was built.

A second headgear fire occurred in 1947 when a spark fell from a welding gun onto a cloth in a barrel of grease that was beside the top of the shaft. The pit was evacuated, and the H.M. Inspector of Mines was sent for before normal working was allowed again. The fire had produced clouds of black smoke, however there was no effect on the men underground as it had happened at the upcast air shaft; had the accident happened at the downcast air shaft many of the men underground would have been asphyxiated by the smoke.

In 1957 a major reconstruction took place, including the deepening of the shafts and the installation of new electric winding engines. A Labour Party Scientific Study issued a warning to the National Coal Board (NCB) that within two decades environmental policies would necessitate creating smokeless zones, so a pilot plant was built at Birch Coppice for the purpose of discovering the most economic method of making smokeless fuel. When the work was completed and a satisfactory method of manufacturing smokeless fuel was demonstrated in 1963, the plant was closed and dismantled and a new one built at Coventry Colliery.

A connection was made with Dexter shaft in 1982 to improve the ventilation of the workings in the Bench Coal Seam and allow for manriding. A new coalface was planned in 1983 and was to be headed out in a direction where a fault-line had been proven to exist. The coalface hit the geological fault in 1986, and it was agreed that Birch Coppice Colliery would close.