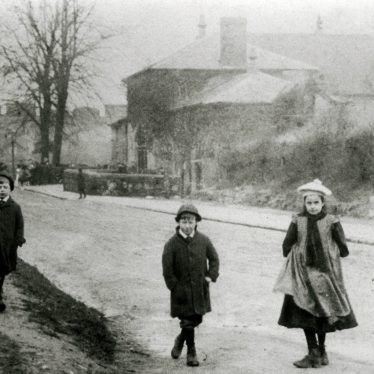 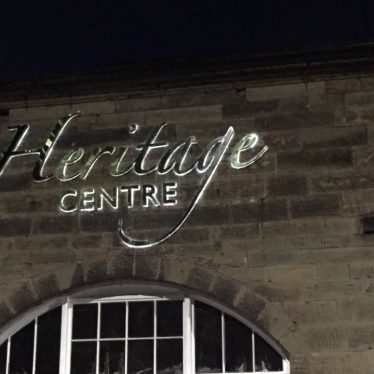 The new illuminated sign at the front of the heritage centre.
Image supplied by John Burton. 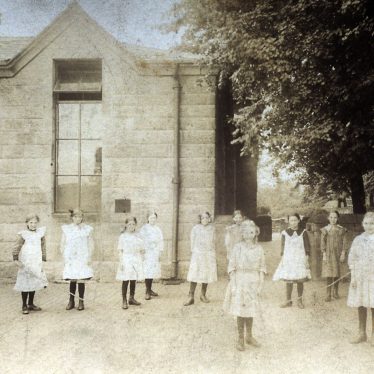 The Chilvers Coton Free School was founded around 1735 by Lady Elizabeth Newdigate, wife of Sir Richard Newdigate. Lady Elizabeth purchased a “Mesuage and garded with appurts” which she had rebuilt and opened as a school for educating “30 of the poor of the parish”.

A document of 1776 between Sir Roger Newdigate (the son of Sir Richard and Lady Elizabeth) and the “Churchwardens, overseers of the Poor of the Parish of Chilvers Coton” states Sir Roger would add to the annuity given by his mother. It was probably around this time that Sir Roger made considerable additions to the building.

In an 1834 account it is stated that “the schools and schoolmaster’s house are handsome stone buildings and were erected by Sir Roger Newdigate”. The premises consisted of two large schoolrooms, one for the girls and the other, with a beautiful stone vaulted roof, for the boys. The Headmaster’s house was next to the boys’ school, and the Headmistress was in residence beyond the girls’ school. This was probably Lady Elizabeth’s original school building.

The school was considerably enlarged in early Victorian times, possibly in 1846, and the rooms with their high ceilings and wall ventilators have changed little since then. At this time it was the largest school in the area, the local church schools were not founded until 1847 and 1848

Daily events in the school

From the time of the 1870 Education Act we know much more of the daily events in the school, for example, an army sergeant was employed to take the boys for drill, and a log entry on May 14th 1877 states “only 23 present, rest at Nuneaton Fair”.

In 1903 the school was taken over by the Nuneaton and Chilvers Coton Education Committee, and soon after, in 1907, the two districts merged as the Nuneaton Urban District.

In 1954 the school closed and became a Parks Department Depot. The Borough Council intended to demolish the building but a spirited group of conservationists persuaded the Council to lease them the building on a peppercorn rent. The building was renamed the Chilvers Coton Centre in 1988, but is commonly known as the Heritage Centre. For further information on the centre’s current activities, please see its organisations page.

This page was originally published by the Chilvers Coton Centre Trust, and is reproduced with their permission. Further information about the Trust can be found on its website.