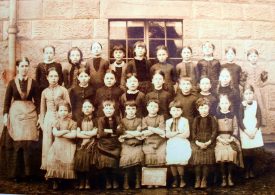 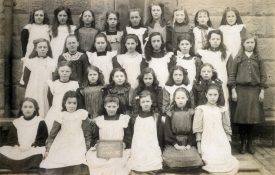 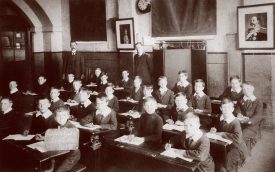 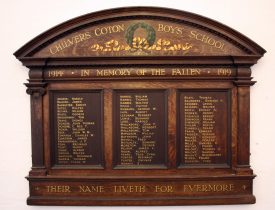 There was schooling in Warwickshire’s Chilvers Coton in the 17th Century without the aid of a school building, because of the educational concerns of the Newdigate family of Arbury Hall. In an age when this was much less common, Sir Richard Newdigate (1644-1710) was particularly keen on children attending school. John Holmes was the first recorded Schoolmaster in 1684 and Jane Hutt a school ‘dame’ in 1692.

Some years after Sir Richard’s death his daughter-in-law Lady Elizabeth Newdigate was temporarily head of the family after the death of her husband. She decided, in 1735, to put schooling in Coton on a more formal basis and arranged for the construction of a charity school, one of many erected over the country in the early 18th Century. It was ‘to teach 30 poor children of the parish’; boys were taught in Reading, Writing and Arithmetic, and girls in Reading, Writing, Knitting, Spinning and Sewing. The school was a free one for the poor of the parish and Lady Elizabeth bore the expenses, which included uniforms. The school, which cost just over £73 to build, was constructed opposite the parish church, the part of the building now closest to Coton Arches.

After about 1760, with Lady Elizabeth Newdigate in failing health, her son Roger assumed responsibility for the school and eventually constructed a new set of buildings adjacent to the earlier ones. The school building plans of Henry Couchman, who also designed the saloon at Arbury Hall in the Gothic style, were ambitious. His plan for a four-columned entrance was not completely followed through, but nevertheless, the frontage with a large semi-circular window showed off ‘Handsome stone buildings’, two storeys high. There were high ceilings and tall windows.

There was now a Master’s residence and Ezra Everson taught 30 boys and girls from about 1743 until he was struck with the palsy in 1770. But by now there was also a schoolmistress and a Mrs Everson, either Ezra’s widow or his daughter- in- law, remained at the school until 1804. Records are patchy for this early period, but by the 1830s the school had grown to over 80 boys and 60 girls, though attendance was frequently intermittent and many left before the age of ten.

The early to mid 19th century saw the growth of schooling over the whole country. In Coton from the late 1830s onwards Charles Newdegate continued to fund the school: by now, many others charged a small fee. Between 1845 and 1847 he organised the alteration and enlarging of both Sir Roger’s boys’ school and the Master’s house where Schoolmaster and Schoolmistress Mr. and Mrs. Clarke resided for over 25 years.

The central part of the building was made into a large boys’ schoolroom entailing the moving of the Master’s and Mistress’s accommodation to behind the original boys’ schoolroom. Their house would also occupy part of the second storey. From his personal resources Charles Newdegate also constructed a new Infant School nearby. This opened in 1848 on the other side of the road next to the church.