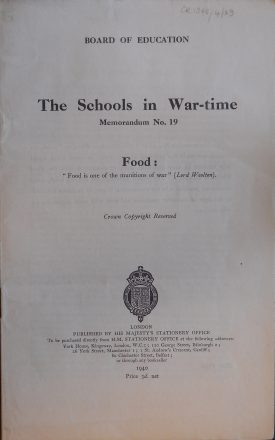 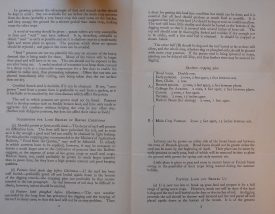 ‘Food is one of the munitions of war’ (Lord Woolton)

From the outset of the Second World War, the Board of Education was extremely pro-active in encouraging schools to lead the way in maintaining vital food production. A number of the memoranda issued have survived as part of the Shrubland Street County School, Leamington Spa collection.1

Food from the land

In Memorandum No. 1 ‘Schools and Food Production’, published September 1939, Head Masters were encouraged to immediately secure an area of land for growing food as

‘We are a nation of gardeners and there can be very few schools upon the staff of which one or more competent amateur gardeners are not to be found who can take general charge of projects of this kind’2.

What is interesting about the document from Shrubland Street School is that someone has annotated the leaflet with information about what the school themselves have in the way of equipment so we know that they had ‘1 barrow, 6 spades, 6 digging forks, 3 rakes, 3 hoes, 1 garden line’ which, according to leaflet’ suggestions,  would have been enough for roughly 10 boys to be involved.

As it was rather late in the year for growing crops when war was declared, Memorandum No. 8 ‘Winter in the Garden’3 followed up Memorandum 1 by providing information about the sorts of activities that could be completed during the winter months to ensure that the land was ready when the spring came. The leaflet was clear that sloppy work was not to be accepted:

One Headmaster reported that a group of evacuated boys dropped their tools where they stood when their gardening time was over. Tools should always be carefully cleaned and stacked tidily when the work is done.

Alongside the growing of crops, schools were encouraged to be involved in the collection of the ‘Wild Food Crop’4, particularly the blackberry crop. Participating schools were urged to ‘get in touch with their fruit preservation centre as soon as possible, to arrange where and when the fruit is to be delivered’. This drive to collect as much as possible was ‘to make up for the poor crops of soft and stone fruit…’ that appears to have occurred the previous year.

Have your own school farm

Memorandum No. 245 was concerned with the topic of raising livestock.

To increase food production and make the maximum use possible of canteen and kitchen waste… The keeping of pigs, poultry, rabbits and bees is well within the capability of most rural schools…In the present state of national emergency a special plea is made for an increase in the number of schools which keep bees, for the amount of honey and sugar used for winter feeding is normally returned with very large interest…

If a school was worried about how to house this new stock, fear not as ‘elaborate buildings for housing stock are not necessary…the work can easily be done by pupils under the direction of any teacher who is a good handyman.

Education is not just for children

Education around food was not limited to children; in Memorandum No. 196, the Board of Education produced a leaflet which said ‘In addition to their work at school, teachers will undoubtedly be called upon to widen their sphere of influence by undertaking demonstrations to the general public as part of the “National Food Education Campaign”.’

This 16 page booklet contained a host of good ideas from how to group topics together (using catchy titles such as ‘From Plot to Pot’) to suggestions of mid-day meals for those on a low or moderate income, as well as including information about meals that didn’t need items which were rationed. Looking at the meals suggested, they were surprisingly diverse and well-balanced with one suggestion being that

Milk, wholemeal bread or baked potatoes with margarine, cheese and a salad or fruit make an excellent meal with the minimum of cooking…