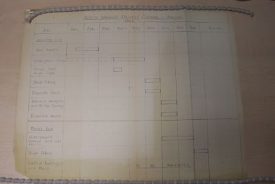 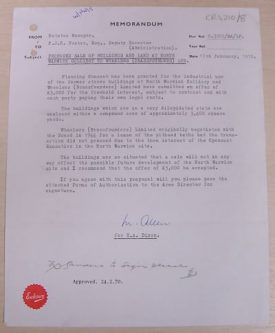 This record1 shows the plan and proposed time scale for closing the North Warwick Colliery in 1965. This process was thought to take nine months and involved removing and dismantling machinery, filling in the underground shafts and demolishing the surface buildings located in the minefield.

The mining industry has long been established in Britain and by about 1750 five million tons of coal was being produced in Britain every year. However despite high levels of production and demand within British society, the movement of coal was initially restricted by the poor transport network throughout Britain. This limitation was overcome in the mid 1700s with the construction of canals, notably in the Midlands, which lowered the cost and facilitated the process of moving coal around Britain. The improvement in transport links combined with the advent of more complex and efficient machinery in Britain throughout the 18th and 19th centuries ensured that the mining industry remained successful and productive.

During this period of growth, collieries were mostly controlled by regional companies or families such as the Newdigates (who ran the Griff Colliery in Warwickshire). This all changed in 1947 when the Government nationalised the coal Industry and set up the National Coal Board to control the mines.

The extraction of Coal in Warwickshire has taken place since the 13th century, although initially mining was limited to the surface ground level. The main companies involved in the early stages of coal production in Warwickshire were the Bedworth Colliery and the Griff Colliery.

After the initial development the mining industry in Warwickshire expanded to meet the local demand for coal which in the early 18th century was for domestic use. The Warwickshire collieries did supply some areas outside of Warwickshire such as Oxford but despite this expansion they were unable to break into the London fuel market.

The decline of British collieries

After World War II and the government decision to nationalise the British coal industry, many of the mines such as the North Warwick Colliery were gradually closed. This was partly due to coal becoming less important as newer and more efficient methods of fuel were introduced and consumed in the place of coal. Although other mines in Warwickshire remained open after the North Warwick Colliery was shut in 1965, the number of people employed in the industry halved between 1962-1971.

This article was Document of the Month for the Warwickshire County Record Office in February 2012. Further articles can be found on their website.

Map marker in the right place? If not, please correct the map.
Locations
Polesworth (220)
Subjects
Mining and Quarrying (553)
Date

Linkedin
More from Polesworth
More from Mining and Quarrying