You are here: Home>Locations>Curdworth>Warwickshire Apprentices: The System 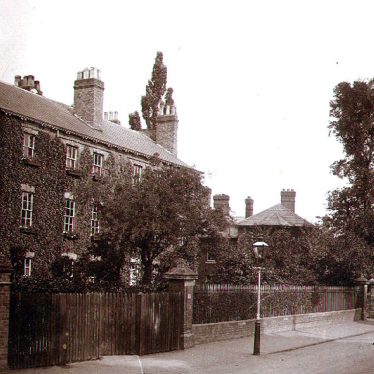 Houses in Dunchurch Road, Rugby. 1900s [The large house on the left has been identified as The Laurels which later became apprentice accommodation for A.E.I. Rugby and is on the opposite side of the road and near to St. Maries Catholic Church]
IMAGE LOCATION: (Rugby Library)
Reference: RUG, Dun 7, img: 5808
This image is subject to copyright restrictions. Please see our copyright statement for further details. 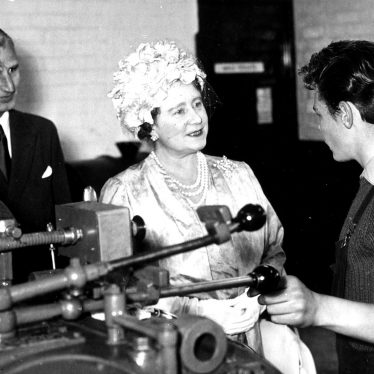 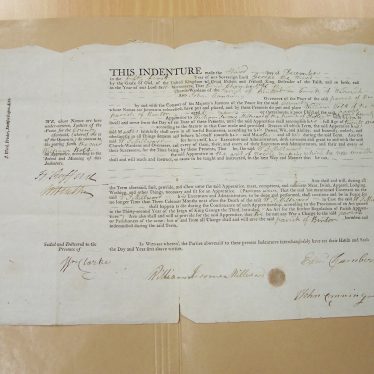 In times gone by, the way to learn a craft and earn a living was to be apprenticed to a master. You would be legally bound to the master for a period of years (often seven) after which time you would become a journeyman, then ultimately a master yourself. Warwickshire County Record Office contains a large number of records relating to apprenticeship, many of them concerning paupers. For each apprentice, two indentures would be drawn up – one for the master and the other for the apprentice or their sponsor. The indented cuts across the top gave the document its name; the cuts on the two copies should match each other exactly, thereby making forgery difficult.

The indenture set out the agreement as to the rules the apprentice and the master were to observe. In 1671 John Allen, an orphan from Over Whitacre, was bound for seven years ‘of his owne free and voluntary mind and will’ to William Daniel, a ‘Mason & Bricklayer’ of Meriden. The young apprentice was illiterate, making a mark at the bottom of the deed. He was to obey his master, and not waste or lend out his master’s goods. His leisure hours were also regulated: ‘At unlawfull games hee shall not play; matrimony dueringe ye sayd term hee shall not contract; Taverns Innes or ale houses or other houses of Custome hee shall not haunt nor frequent’.1  Most people were apprenticed locally, but a few would travel many miles to be apprenticed to a particular trade, or a particularly skilled craftsman: in 1661 Henry Wright of Polesworth was apprenticed to a comb-maker in London by Nethersole’s charity.2

The wages of artificers, labourers and servants were originally set each year at the Quarter Sessions. For example in 1672 the apprentice of a master carpenter received 4d a day with meat and drink, or 8d without, two thirds of his master’s fee. The apprentices of bricklayers, tilers and plasterers above the age of 12 received 3d (with food) or 6d (without), half the pay of a skilled man. Women and girls were paid much lower rates – a woman haymaker earned 2d a day whilst a man haymaker got twice that amount, and a dairy or wash maid received £1 10s a year, about 1d a day.3

In 1816 Joseph Parker of Nuthurst was apprenticed to his father, William Parker, butcher, for seven years. In return for faithful service he would receive his keep, washing, wearing apparel, lodging, and all other necessities, whilst learning the ‘art of a butcher’.4 In 1755 William Swineshot of Lea Marston was apprenticed to John Swineshop of Curdworth, potman. John undertook to teach William the trade of potselling until he reached the age of 21.5

Apprenticeship continues today, offering a valuable route into skilled employment for young (and not so young) people. Two of the photos relate to AEI apprentices in Rugby during the 20th century.

This article is based on material from several Warwickshire County Record Office exhibitions.