You are here: Home>Locations>Bedworth>Coalmining Children in Warwickshire 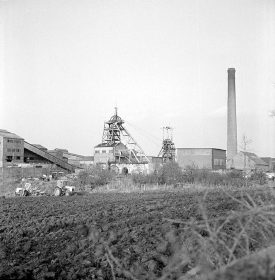 Newdigate Colliery from the main entrance. Taken after the colliery had been closed by the National Coal Board. 1982
IMAGE LOCATION: (Warwickshire County Record Office)
Reference: PH(N), 882/6708, img: 5438 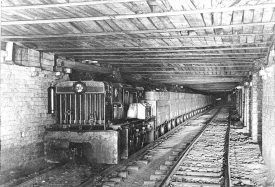 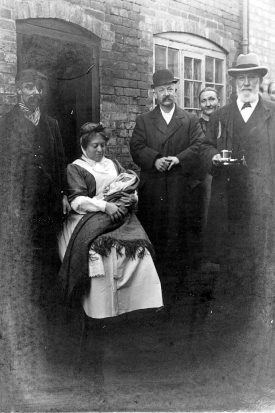 A mine worker with his wife and child outside his cottage with William Johnson M.P. holding a tea-cup. 1900
IMAGE LOCATION: (Warwickshire County Record Office) PEOPLE IN PHOTO: Johnson, W MP, Johnson as a surname
Reference: CR, 1281/16/19, img: 519
This image is subject to copyright restrictions. Please see our copyright statement for further details.

Young boys were employed in Warwickshire coalfields in the 18th and 19th centuries.

A coal account book in the Newdigate archives refers to the use of boys in the Griff colliery in the early 18th century. The accounts list the earnings of several of them: ‘1 boy Cleansing the level 6d’; ‘The Boy 1 Day 6d’; ‘A boy 1 Day 10d.’ Although the work must have been both hard and dirty, these wages would have been attractively higher than those for farm work at that time.1

Work in the 19th century

Dr Mitchell gave evidence to a national commission in the 1840s about the employment of children in the Warwickshire coal fields.2 His report stated that there were few boys employed in mining because the Warwickshire coal came in pieces larger than they could manage. The pits were worked by ‘butties’ who were paid by the ton brought up to the surface, and they employed and paid men who worked under them. At Bedworth Charity Collieries one of the butties reported employing 30 men and eight boys and lads. He said that no child under eight was employed, but one boy aged eight worked on the bank and carried picks sent up the shaft to the blacksmith, whilst the youngest boy in the pit was “better than 11 years of age”.

Elsewhere boys attended to the trap doors or doors for regulating the current of air, some went on errands; some drove the horse in a gin, by which means coal and ironstone could be brought up from pits that were not very deep. Others were employed sweeping away the coal dust from the headings where the men were at work or in hooking on the waggons to the end of the chain or rope by which they were hoisted to the top. The job requiring the greatest exertion of physical strength was pushing the laden waggons on the rails from the workings to the main railways and only boys of ten or eleven were strong enough to do this work. It was held that their size and agility rendered them much fitter for this task than the men. No women or girls were employed in the Warwickshire coalfield.

Dr. Mitchell’s report gave the accounts for William Johnson’s family.3 This miner had a wife and five children; his weekly income was supplemented by his 14 year old son earning 3s a week and his 9 year old daughter earning 1s 2d a week. The family’s weekly expenditure was £1 0s 2d, so the children’s income was clearly essential to the family’s survival. Even so they subsisted on a poor diet and were forced to live on credit towards the end of the week.

The 15 year old enjoying working in a Warwickshire pit

I was 15 last Christmas. I was a weaver; but, trade being bad, I went down to the pit to run the rails. I liked it very well. I am much stronger, and have much more flesh on my bones. It agrees very well with my health. I get 2s 4d a day…All the boys are used very kindly, and we have nothing to complain of.

The 1842 report on conditions of employment in coal mines showed that in nearly every district children were employed underground at the age of six, in some cases at five or even younger. The child workers drew trucks along passages too narrow for grown men, or looked after the ventilating doors under conditions which were very like solitary confinement in darkness.

This article is adapted from an exhibition held by Warwickshire County Record Office in 1995.

Map marker in the right place? If not, please correct the map.
Locations
Bedworth (518)
Subjects
Mines (131)
Mining and Quarrying (548)
Date