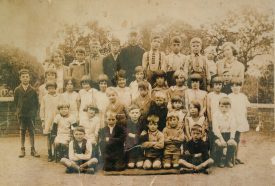 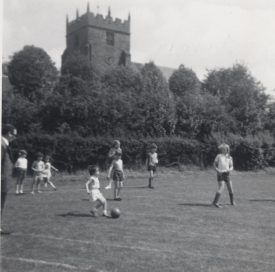 After 1939, wartime brought the occasional evacuee while double summer time meant a very late finish to farm work, and very dark winter mornings. In August 1940 anti-aircraft fire was heard, bombs fell nearby, and the school premises were used by the local Home Guard. A cultural eye-opener occurred in April 1943 when four African-American soldiers billeted at Astley Castle came to the school to sing.

Life was challenging. On wet winter days, if you had walked a long way to school your outer ware would still be wet when it was time to return home, you may have sat at the back of the classroom far enough away from the inefficient fire to feel cold all day and, on the worst days, have trouble gripping your pen due to the freezing conditions. In addition, you might have been required to milk some cows early in the morning before setting off for your lessons. However, the overall health of the children had improved and visits from a doctor or nurse sorted out the odd nit or louse. This was one of the benefits of the funding of a more national educational system.

The end of the old elementary school

The Education Act of 1944 meant the end of the old elementary school which took pupils to about age 14, who then left with limited qualifications. In many other areas, children were already moving from these schools to a secondary school at the age of 11, though in Astley only exceptional students had left in this way by gaining a scholarship. Now, all children would say farewell at 11 to go to a variety of secondary schools. The leaving age was raised to 15 in 1947 to ensure at least four years was spent at this higher level.

After 1951 the whole cost of school repairs and maintenance fell on the Local Education Authority. The long financial connection between the Newdegates and the school had almost come to an end. Mrs Fitzroy Newdegate was invited to be one of the two Foundation Managers.

In November 1970 Warwickshire Education Committee announced the school would close in July 1972. This was a cause for sadness among the close-knit band of children now forced to leave. As they later recalled their time at school, they retained fond memories of what one of them described as a ‘magical’ atmosphere. Astley is still a place with great character but, with the disappearance of its school, came the loss of part of that community feeling which children congregating each day can engender in a unique and irreplaceable way.

Part one can be read here.