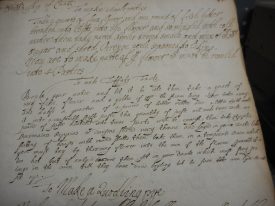 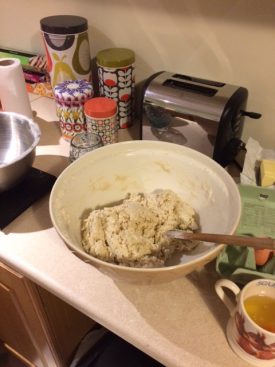 A 'reasonable stiffe paste', after a little experimentation.
Image courtesy of Ruth Long 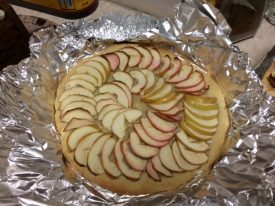 As the autumn season continues, and the air feels a bit fresher, it seems an apt time to introduce the fourth recipe in our Heritage Cooking Challenge. Taken from an early 18th century recipe book in the Warwickshire County Record Office‘s Newdigate Collection, the recipe is named ‘Taffaty Tarts’, and is basically an older version of our still-loved apple tart.

The word ‘taffaty’ comes from ‘taffeta’, a word ‘applied at different times to different fabrics’, whilst also having the meaning of ‘florid, bombastic; over-dressed; dainty, delicate, fastidious’. Bearing all this in mind, I believe in this context the ‘taffaty’ implies the daintiness of the tarts, and perhaps the arrangement of the apple slices as well, positioned delicately like folds of material over each other.

Apple tarts and/or pies have been popular in England since at least the 14th century: a recipe ‘For to make Tartys in Applis’ can be found in a recipe book compiled by Richard II’s master cooks.

There were a few points of mystery about this recipe as I started out (you can find the transcription in the attachment below). For instance, how much was a quart of flour? For the eggs, what did ‘the skinns being cleane taken away’ mean, exactly? In the end, I decided the ‘skinns’ in question were probably the egg whites. But having pondered and consulted a little, I rolled up my sleeves one evening and prepared to make the daintiest apple tarts you ever did see.

The agony of a ‘reasonable stiffe paste’

Having scrolled through various amounts of contradictory advice online, I decided that a quart of flour was probably equal to a quart of water – that being two pints or in mass, just over a kilogram. According to the recipe, adding four egg yolks and 1/8 oz butter to this mountain of flour would give me a ‘reasonable stiffe paste’. Suffice to say, that having added them, all I had was the same mountain of flour with the occasional pocket of congealed mixture. But if a stiff paste I needed, a stiff paste I was determined to achieve. So I got rid of a third of my mixture, added another egg yolk, and enough water and milk to make it up. Clearly whatever wisdom they had making apple tarts in the 18th century, it had in my case been lost.

‘One pound of sugar divided into tenne tarts will be enough’

As the sugar was mentioned after mixing the other ingredients, and was not combined with the rest of the dry ingredients as would happen in a modern recipe, I decided to add this next, to my stiff paste. As I had binned a third of my mixture, I decided to shave a third off the sugar as well. The result was an incredible sticky dough, most of which delighted in adhering itself to the majority of my hands and forearms. It was the sort of dough that, just by looking at it, one innately knows that it will be stubborn to any form of shaping. But I was still determined, so I then added flour until it became more manageable.

I powdered my work surface with flour and hope, and ripped off a chunk of dough. It did shrink back a little as I rolled it out, but was reasonably pliant. In the recipe the apples that are mentioned are described as ‘Rarmaines Pippins or Dewsens’ – none of which I could find much information about. But as a Cox is a type of Pippin, I thought that would perhaps be the best substitute. So I sliced two bags of said apples into thin waxing moons and proceeded to decorate.

As my oven is small, and I had a lot of dough, I made the tarts in batches. This allowed for a little re-imagining. My first attempts looked a bit pathetic – a plate of pastry on which random shrivelled bits of dried apple were scattered. Clearly, the more apple, the better. Thankfully the later attempts are a bit more aesthetically pleasing – although sadly I’m not sure I’d call them dainty or delicate!

Although hard-going on the teeth of my colleagues, reactions were reasonably good. Too sweet for some, not sweet enough for others – but you can’t win them all.

Visit this page to find out a background to the project.