You are here: Home>Locations>Fenny Compton>The Murder of PC William Hine

The Murder of PC William Hine 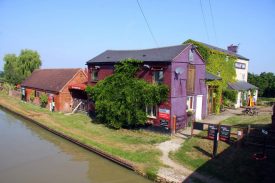 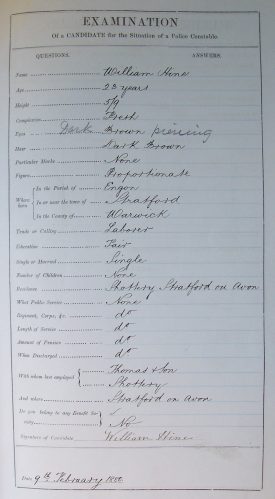 Details of William Hines application for the position of PC, with a striking description of his eyes!
Warwickshire County Record Office reference CR2770/69

On the evening of 15 February 1886, PC William Hine left home in Fenny Compton for duty on patrol around the “George and Dragon Inn” where a cattle auction was being held. He was never seen alive again. His body was found nine days later in the Oxford Canal: his death was not caused by drowning, but by a wound inflicted to his neck after being knocked unconscious. The murderers were never apprehended; the concensus of opinion was that he was killed by poachers known to him, who needed to silence him permanently.

His funeral took place in a snowstorm on 1 March 1886 and was attended by a large number of policemen from the various police divisions, three Superintendents and the Deputy Chief Constable. A fund organised for his widow and his three small children, Arthur, Harry and Sylvia Ellen, raised over £800 and from this £1 was paid weekly to Emily Hine. She remained a widow until her death in 1924.

The Warwickshire Constabulary was formed in 1857 in response to the passage of the County and Borough Police Act during the preceding year. Working conditions for the policemen employed were harsh in the 19th century. Their working hours were not only long and poorly paid, but the very nature of their work exposed them to great danger from criminals armed with knives and cutlasses against which their only defence was a truncheon. For PC William Hine whose examination record is on display, this was clearly insufficient as he became the first and indeed, the only policeman to die from criminal violence during the first hundred years of the Warwickshire Constabulary.

The examination of William Hine for the situation of police constable1 is one among many contained in the Warwickshire County Record Office collection2. They are of particular interest to family historians because they give a description of the person’s physical appearance. There are also conduct registers available in this collection, and again William Hine is entered here3. However, other conduct histories are not always as exemplary as his! This collection is a rich source of information on the careers of individual policemen and provides valuable insights to this occupational group in terms of wages and the standards of conduct required.

For access to records less than 84 years old, application should be made to the Warwickshire County Record Office. They can be emailed at recordoffice@warwickshire.gov.uk

This article was Document of the Month for the Warwickshire County Record Office in July 2008.   Further articles can be found on their website.