You are here: Home>Locations>Warwick>The Courthouse, Warwick 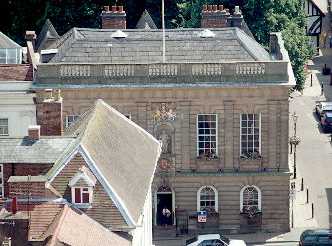 The Courthouse was built between 1725 and 1728 on the site of a Post Medieval civic centre, though meetings of the corporation were held here until 1926. It is situated on the corner of Jury street and Castle Street, Warwick.

1 The present building was built in 1725-8 by Francis Smith. It is of stone, 5 bays long, 2 storeys high, rusticated throughout. The ground floor has round headed openings and the upper floor has Roman Doric pilasters surmounted by a triglyph frieze. The first floor ballroom has fluted ionic pilasters and a carved ceiling.
2 Exterior was restored in 1960. It is situated on the corner of Jury and Castle Street on the site of a Medieval building described as “courthouse” in 1554. Used as a meeting place of the corporation until 1590, and was the normal place of corporation business throughout the 17th century. Part of Castle Street facade, known as the Mayor’s Parlour was damaged in 1694. Meetings of the corporation held here until 1926 when the present council chambers were opened in Pageant House.