You are here: Home>Locations>Tanworth-in-Arden>Tanworth Mill 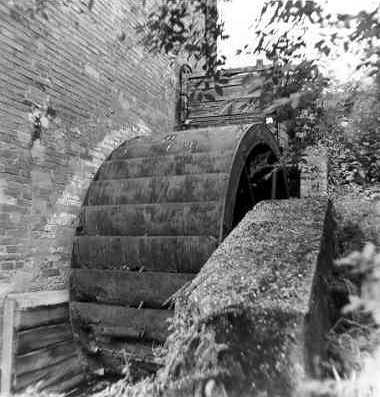 Documentary evidence suggests this is the site of Tanworth Mill, a watermill originally built during the Medieval period. A pond and an overshot waterwheel, dating to the Imperial period, survive. The site is located 600m south east of Danzey Green.

1 A watermill in Tanworth is recorded in the early 13th century and by 1316 there were 2 mills in the manor. In 1627 3 mills existed in the Archer Estate. Information on ownership exists for the 19th century and early 20th century. The last miller was there until 1947. The stone floor of the mill is now used as a living room. The 3 storey brick building dates from the early 19th century. The external overshot waterwheel was installed in 1867 and survives. Much of the machinery appears to remain in position. The small pond which fed the wheel has been retained as an ornamental feature.
2 The water from the large millpond continues to flow from the pond under the mill bridge and into the wooden penstock, although there is no longer a sluice system in operation to control the flow. After passing under the wheel, the water course flows on through the garden to join the River Alne about 200m beyond the mill.
4 2 grants to the Earl of Warwick between c1204 and 1220 granted land for the watercourse of the mill and land to form a fishpond, and earthworks of 2 adjacent ponds (the latter now dry) can still be seen today.