You are here: Home>Locations>Tanworth-in-Arden>Medieval Mound 200m N of Alderhanger Wood 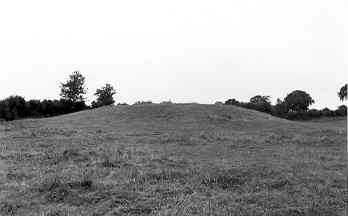 A mound of unknown purpose, Tanworth in Arden
Warwickshire County Council
Description of this historic site

The site of a mound, possibly part of a moated site, dating to the Medieval period. It is visible as an earthwork and is located 200 north of Alderhanger wood.

2 Mound, situated in a stream valley at the foot of a gradual SE facing slope. Overall diameter 38m; maximum height 4.2m. The near-circular level summit is 18m in diameter. On the W side there is a ditch with an average depth of 2m. The mound has probably been partly constructed with material from the ditch. It is under grass and in an excellent state of preservation apart from some slumping on the SE side. Discovered during field investigation and surveyed at 1:2500. Although clearly of Medieval date the mound is difficult to classify. Its slopes are less steep than one would expect and its situation, overlooked by higher ground to the NW, is not typical. The existing road which crosses the valley just E of the mound runs on a considerable embankment which could have retained a large pond or lake. However it appears that at the present height of the embankment the water level could not have been high enough to flood the ditch on the W side of the mound and it is therefore unlikely to have been an island of the type which often occurs in Medieval fishponds. In any case the depth of water would be unusually great for a Medieval fishpond. It is possible that it was a form of moated site with water on the E and a dry ditch on the W but the habitable area would be small and its shape is not typical. However it is comparable in situation with two other sites. The first is a small roughly circular moated site on the edge of Tony Park, Staffordshire (SJ8106) which, however, is much lower (about 1m high). The other is described by Aston and Monton (SP07SW4) as a flat platform on the valley side, almost completely moated, which they thought might have been a Medieval grange or a place of recreation for the abbots of Bordesley. Unfortunately this site has now been destroyed and no direct comparisons can be made. The only historical reference found which may apply to this mound is a mention of a manor house and park in the manor of Aspley in the 13th century which appears to be unlocated.
4 The mound is still in a good state of preservation.
5 Photograph on record card.
6 During 1990-92 a proposed pipeline was re-routed to avoid the earth mound. Archaeological observations of the actual route did not identify features or finds of interest.