You are here: Home>Locations>Ratley>Ratley Castle 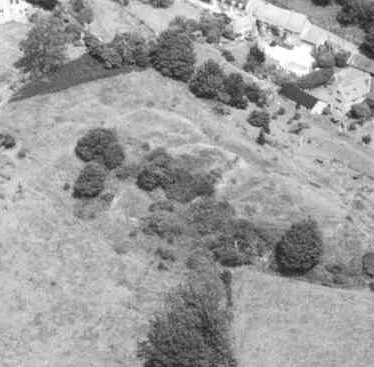 Ratley Castle, a Medieval motte and bailey castle. The motte has been damaged by later quarrying for building material. The castle is located 250m west of the church at Ratley.

1 Motte standing on a wedge-shaped hill. It is about 13m across at the top and has very steep sides 5 to 6.7m above the ditch which is formed round it. There is a small bailey on the N side enclosed by a high bank and on the S is an enclosure 20-23m across with a somewhat irregular bank. The whole surface of the enclosed area is much broken, presumably by people digging for stone. The buildings of Ratley village may have been built out of stone from the castle. The motte must have been crowned by a timber tower, the S enclosure is possibly the site of later buildings, the bailey being too small to contain them in the usual way. Turchil the Saxon owned Ratley and he or one of his sons may well have been responsible for the castle.
3 Small motte with double bailey.
4 Excavation showed that the bailey had been damaged by later quarrying. A dry stone wall was located within the bailey bank and a tumble of stone in the motte ditch. Finds of 12th/13th century pottery and Roman sherds (PRN 6144).
5 A section across rock cut bailey ditch produced no dating evidence. Ditch appears to have been filled soon after construction. Almost the whole area of the NW bailey under excavation. Stone footings of a possible entrance tower, post holes and beam slots located. Pottery is almost all unglazed cooking pot. Finds include a 12th/13th century spur and a gilt bronze ornamental strip. Section across motte ditch is almost complete, with traces of a bridge structure with one stone from a moulded arch. More Romano British pottery.
6 Further excavation suggests that a gap in the bailey is later than the castle. The Medieval entrance may have consisted of a flying bridge at this point. Examination of bailey bank indicates possible timber laced structure. More post holes and beam slots in the bailey. Finds include a barrel-padlock and key from door of square building and 12th century pot. A piece of cooking pot from build-up material of motte may indicate that the motte is secondary.
7 Occupation layer and hearth under the motte may indicate that the motte is secondary.
9 The small northern bailey might be a battery emplacement.
10 The site was in good order and the management agreement adhered to.
11 Management agreement concluded in 1990 (see FI file).
12 The excavation has provided evidence suggesting that the castle was occupied for a short period in the C12th. The copper alloy decorative strips, the fiddle key horseshoe nails and the medieval pottery assemblage all support a C12th century date. The small quantity of both pottery and animal bone suggests that occupation was only for a short period. The mid C12th moulded stone, part of an apparent planned construction, dates the destruction of the castle.
13 Pottery finds sheets from 1986.
14 Scheduling record, after review, from 1999.
15 Information about the excavations carried out by Bishop Bright School (the Trinity School) between 1968 and 1973.
16 Information relating to an unspecified excavation.
17 Short note about items to be returned.