You are here: Home>Locations>Wibtoft>Poss Extent of Medieval Settlement at Wibtoft 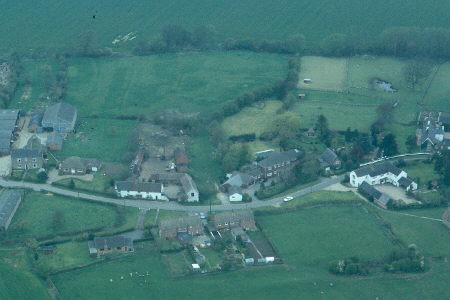 The possible extent of the Medieval settlement of Wibtoft. The area of the settlement is suggested by the remains of Medieval earthworks which are located to the west of the main street.

1 Possible extent of Medieval settlement of Wibtoft as suggested by ridge and furrow and field boundaries.
2 Air photograph.
3 The extent of the village can be seen on the 1st edition Ordance Survey map of 1886.
4 The modern village plan is seemingly irregular in form, but with the addition of earthwork evidence it becomes clear that the main street was once straighter, and that there was a unit of regular plots on the west side of the street with a manor and chapel nucleus on the east side. Wibtof (with Copston Magna to the NW), are located on the wolds, close to the Danelaw boundary. They are small but planned settlements which have place-name elements suggesting Scandinavian influences.
5 There are 2 entries for Wibtoft in Domesday; in Brinklow Hundred. The Phillimore edition has a grid ref of SP 4787.
Ref 16,39 (Land of the Count of Meulan) in Wibtoft and in Willey 1/2 hide. Fulk holds from him. Land for 4 ploughs. In lordship 2; 3 villagers and 4 smallholders with 2 ploughs. Meadow 40 acres. The value was and is 30s.
Ref 16,40 in the same village 2 1/2 hides. Robert holds from him. Land for 5 ploughs. In lordship 2. 5 villagers and 3 smallholders with 2 Frenchmen have 3 ploughs. Meadow 30 acres. The value was and is 50s. Saxi held these three lands freely before 1066.
6 Obervations on land north of Gable End in Green Lane (EWA7507) revealed archaeological remains of medieval occupation on the site from 12th/13th to the 14th century. Archaeological stratigraphy and features, including two rough wall foundations were recorded. The two foundations contained fragments of 12th/13th century pottery suggesting that they are medieval. They were in close proximity to each other and probably formed part of one or more medieval buildings on this part of the site, possibly outbuildings or farm buildings. The foundation trenches also revealed a number of probable pit features and a clay layer with occasional medium sized cobbles. This included fragments of 12th-14th century pottery and animal bone, and possibly was the remains of a yard surface. It is likely that the narrow stip occupied by the current site is a fossilisation of the eastern part of an original medieval tenement. Its northen and southern boundaries run along the line of slight ditches which appear to continue as earthworks across the field to the north-west.