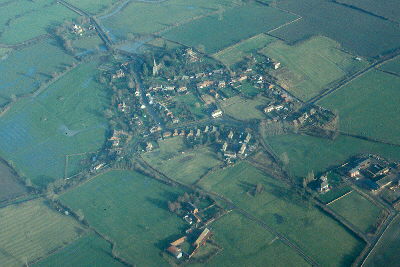 The possible extent of the Medieval settlement at Grandborough. The area of settlement is suggested by documentary evidence.

1 The possible extent of the Medieval settlement, based on the first edition 6″ map of 1886, 35SW, but not including the possible shrunken area, 5367.
2 There are two listings of Grandborough in Domesday. The Phillimore edition gives a grid ref. of 4966.
Ref 6,2:- (Land of Coventry Church) Grandborough 8 hides and 1 virgate (of land). Land for 17 ploughs. In lordship 2; 27 villagers, 11 smallholders and 4 slaves with 14 ploughs. A mill at 16d; meadow, 32 acres. Value before 1066 £6; later 100s; now £8.
Ref 44,3 (Land of Richard the Forester) Richard holds 2 hides in Grandborough for the King. Land for 4 ploughs. In lordship 2; 3 slaves; 6 villagers and 2 smallholders with 2 ploughs. Meadow, 20 acres. The value was 20s; now 50s. Bondi held it freely.
3 The 1886 map shows lots of empty plots/small fields. The village looks unplanned, with little lanes and enclosed pieces of settlement. The church [WA3031] dates from the C14th. Immediately to the north is the medieval shrunken area [WA5367]. On the first edition map, the site of medieval earthworks [WA7978], there are small fields, and one or two buildings.
4 Archaeological observation of the excavation of foundation trenches for a new dwelling at the former Old Royal George Inn, Grandborough, recorded a pit containing a sherd of 12th/13th century pottery. Two sherds of residual 13th/14th century pottery and part of an undated whetstone were also recovered from a layer on the north-western side of the site.
5 A possible medieval pebble yard surface, well-made and of substantial construction, was recorded during observation on Church Road.
6 Observation of groundworks for a new development on Sawbridge Rd, revealed a sequence of Medieval ditches forming plot boundaries within the Medieval village dating from the 12th/13th to 14th century. Other Medieval features included a probable rubble yard surface, a possible structural slot and a posthole. Some 18th/19th century features were also recorded.
7 Archaological observations of foundation trenches for a new dwelling to the rear of the ‘Shoulder of Mutton’ pub, revealed a single sherd of 12th/13th century pottery. This contrasts with the high level of 12th/13th century activity recovered at the adjacent site east of Sawbridge Road (see 6), and suggests that this site may have alin in the undeveloped rear part of a medieval property.