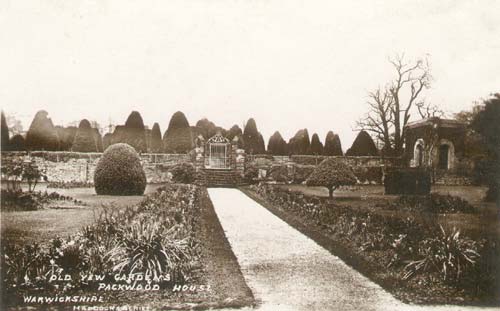 A view of the gardens at Packwood House, Lapworth
Warwickshire County Council
Description of this historic site

The site of a park and formal garden dating from the Post Medieval period onwards. There are three gazebos and the garden contains a topiary garden said to represent the Sermon on the Mount. It is situated at Packwood House.

1 The earliest garden areas are the east forecourt, the rectangular south garden enclosure, and a small area to the west of the house, with mid-17th century walls and structures. In the west garden a sundial 1667, and the ‘Roman Bath’, a plunge pool, 1680. The south garden enclosure was developed during the early 18th century with the south west corner gazebo, and bee-holes in the southern face of the south garden wall. There are two other gazebos both built early 20th century. There is a topiary garden beyond the south garden, this area is also planted with mature yew trees, the grouping of them is said to represent the Sermon on the Mount, with attendant Apostles and Multitude. In the late 19th and 20th centuries herbaceous borders, rose beds, and the sunken garden were constructed.

2 Recording of the groundworks for a new pathway on behalf of the National Trust recorded a series of drains associated with earlier, probably 19th-century, arrangements of the gardens.

3 Recording for groundworks in 2005 on the behalf of the National Trust recorded a series of drains the oldest of these seem to be three brick-built drains, also three parallel runs of cylindrical ceramic drains where noted, there was some small finds of 19th century pottery found. These drains where all found south of the house just beyond the garden wall separating the house from the southern garden.
Later on in 2009 the National Trust again commissioned ground works which led to the recording of archaeological evidence both in the months of January and October. In January 2009 a capped drain was found which consisted of hand made bricks laid in a clay bedding the drain was one brick wide and four brick high, and was capped with an limestone capping. In a shallow layer of silt 0.05m deep was found in which a few sherds of mid 19th century pottery was found. In October 2009 an other capped drain was found of a differing type of construction to the one found in January, this October capped drain was formed of a neatly cut limestone slabs for a base to which five courses of neatly laid and mortared hand bricks where laid to from a wall and then capped with neatly cut limestone slabs it seems to of been a 19th century construction. This October drain also cut a brick feature which seemed to be a small brick drain of which a date of 18th-19th century is a likely construction date.
4 negative watching brief of a pipe trench.