You are here: Home>Locations>Shuckburgh Park>Church of St John the Baptist, Upper Shuckburgh 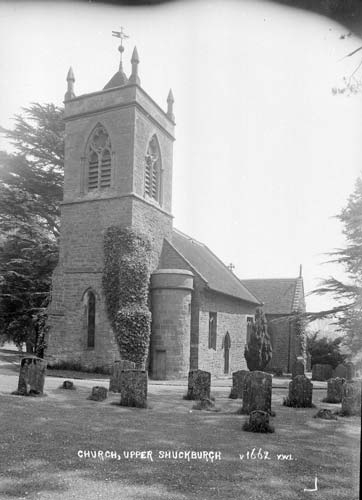 The Church of St John the Baptist, which was of Medieval origin, has been completely rebuilt in recent years. It is situated in Upper Shuckburgh.

1 Chancel, nave, N and S chapels, tower and N porch. Lower stage of tower 13th century, upper two stages 18th century. Rest of church rebuilt in modern times. 17th century monuments and other memorials to the Shuckburgh family.
2 Drawing of circa 1820.
3 Victorian. No date seems recorded.
4 13th century or earlier origins; tower 13th century with 19th century bell stage. Very largely rebuilt mid 19th century.
5 The church of St. John the Baptist has been totally rebuilt within recent times. The base of the tower which escaped rebuilding is of 13th century date and some old materials were reused in building the porch.