You are here: Home>Locations>Middleton>Church of St John the Baptist, Middleton 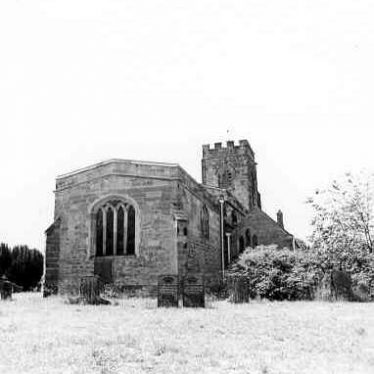 Handprint with initials and the year 1777 carved onto the roof of the church, Middleton
Warwickshire County Council

The church of St. John the Baptist, originally built during the Medieval period with later additions. It is situated in the village of Middleton.

1 12th century chancel and south wall of nave. Remainder of nave and N aisle late 13th century. 15th century W tower. 18th century S porch. Restored 18th century and 1876. Monuments and 15th century screen.
2 There was a priest in Middleton in 1086.
3 An interesting bell-frame exists in the church tower.
4 Replacement of the nave roof in 1993 led to the discovery of a collection of mainly 18th century graffiti. A total of 103 grafifiti, 57 on the nave roof and 46 on the chancel. Most of the graffiti was in the form of feet, but there were also a number of hands, and a small category of symbols. Comparisons are available at Halford, Warks, and Canons Ashby, Northants, and Brodesley, Hereford and Worcester. The reason for and authorship of the work is uncertain; it could be the work of local inhabitants.
5 Photo.
6 As part of an evaluation a trial trench was excavated on the edge of a platform thought to represent the remains of the 13th century manor house; however there was an almost entire absence of Medieval material.
7 N wall includes reset Norman stones. ? pillar bases suggest floor lower than medieval one. Base of cross shaft in churchyard. Heating ducts – along nave & N aisle. Substantial floor lowering in nave & N aisle. Up to about 30cm in W, 10cm in E. Shallow drainage channel around outside walls – probably not below original exterior ground surface. ?Ditch outside original churchyard boundary. Also platform extending from under school, into graveyard. Survival of below-floor deposits inside church probably poor because of floor lowering. Platform extending into churchyard on W, has high archaeological potential as early manor house site.
8 A watching brief on drainage works showed that all the areas excavated had previously been disturbed by the earlier drainage runs. No significant archaeological deposits were encountered.
9 The excavation of a single trial trench within the western corner of the cemetery (SP17619833), in an area which may have overlain the remains of a medieval manor house, revealed no evidence of this possible manor. Three undated field boundary ditches were identified, which probably defined the extent of the medieval field system.
10 Copy of the brief for recording the graffiti footprints.
11 Graphic material recording the footprints.