You are here: Home>Locations>Hillmorton>Church of St John the Baptist, Hillmorton 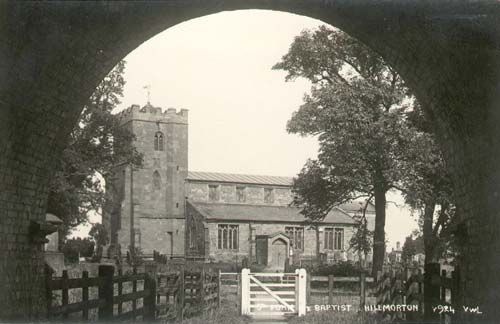 The Parish Church of St John the Baptist. It was built during the Medieval Period, with later alterations through to the Imperial period. The church is situated in Hillmorton.

1 Chancel, nave, N and S aisles, S porch and W tower. The earliest architectural remains are of the early or mid 13th century, and indicate the existence of a chancel and aisleless nave. N and S aisles added and chancel altered in early 14th century. Aisle windows mostly rebuilt at later dates, and the N aisle wall had buttresses added or rebuilt in 1609. 15th century W tower, altered (perhaps completely rebuilt) in 1655 – date on S wall. ?16th century clearstorey. The whole church, especially the chancel, extensively restored in the late 18th century. Early 19th century S porch and W gallery. Three mid 14th century Monuments: of a priest, possibly William de Walton; the defaced figure of a knight, probably Thomas de Astley, and a woman, probably his wife Margaret. Brass of c1410. 12th century font on modern base. Pews of 1774. Vestry with wooden screens within the church. The church is first recorded in the 13th century.
2 Mostly of c1300. Of that date the red ashlar W tower, the five-bay arcades, the tomb recess in the N aisle, and the chancel and N aisle windows. Later adjustments: The clearstorey looks mid C16, and the E window is dated 1640.
4 Noted by Ordnance Survey.
5 A watching brief (Aug 1996) during the laying of a new electricity cable did not identify any significant archaeological finds or features.
6 A watching brief was carried out during the underpinning the south wall of the 13th century chancel. The chancel was extensively restored in the late 18th century. The east window is 14th century and set in a wall largely built of stone but with the upper part of the gable rebuilt in brick. The south wall of the chancel was rendered on its external face and it was not possible to tell if it had been re-faced in brick, as the north wall had been. The south wall was being partially dismantled at the time of the site visit. The rubble core of the south wall contained fragments of colourless post-medieval window glass and a triangular fragment of decorated post-medieval floor tile, suggesting that the wall may have been rebuilt in the late 18th century. The presence of a decorated floor tile was of interest as the majority of the church floor was parquet and those tiles that are laid were plain terracotta. Immediately below the window the underside of a row of hexagonal marble tiles could be seen. These had been covered by fragments of slate and a thin layer of concrete and may also have dated to the 18th century restoration.