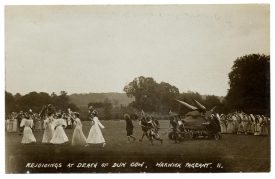 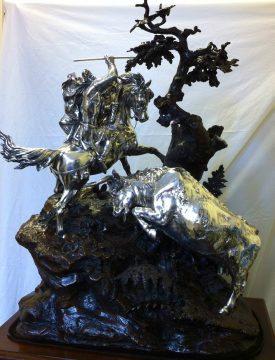 The Warwick Cup, presented at Warwick Races 1854.
Photo courtesy of Warwick Castle, where the cup is on display in the State Dining Room.

Myth and history can sometimes be uneasy bedfellows, yet the mythic past can often be just as key as anything rooted in historical ‘fact’ when forging a community’s identity. Myth can add authenticity and depth to a geographic site, and endow it with a ‘sacred space’. The history of a place, or even the mere fact that a place has a history at all (regardless of what this history is) can afford it a cultural value over and above its aesthetic ‘merits’ or otherwise. It also gives a place a distinct cultural identity beyond the physical geography.

Warwickshire has its own myths, and among the most prominent ones is the Dun Cow. The story goes that the Dun Cow was a huge cow, the size of a double decker bus, and originated from Shropshire. She was able to supply milk to all who needed it, but one day a witch milked the Dun Cow into a sieve. This enraged the cow who broke free, wreaking terror across the landcape. Eventually, the cow was slain by Guy of Warwick on Dunsmore Heath (Guy is a ready supply of mythic stories for Warwickshire).

The Dun Cow and a sense of place

The story does not have the profile of those such as Arthur, or other myths, but it has helped found a sense of tradition within Warwickshire. The Warwick Pageant of 1906 saw the story take pride of place, showing it still held resonance. The myth, meanwhile, survives in the everyday landscape in unusual places. The rib of the Dun Cow (in actuality a whale bone) was on view for a number of years at Warwick Castle, the Warwick Cup, featuring silver figure of Guy of Warwick on horseback killing the Dun Cow, was presented at Warwick Races in 1854, whilst The Dun Cow has been a popular name for pubs across the region in places such as Dunchurch, Stretton on Dunsmore, and Warwick.

Landscapes are constructed “through a braiding together of the material, social and symbolic” (Lorimer 2001: 93) and the use of the Dun Cow is where the two worlds of myth and reality are connected, enabling people to lose themselves in the myth and escape the realities of everyday life. This, then, allows for Warwickshire and its heritage to be represented in a way that allows for a distinct identity, unique to the county; it allows for an escape from the present into an ideal past, present and future, and a sense of local pride. The sense of a Warwickshire identity can be forged by the place’s myth and its heritage, and this is merely reinforced by the physical location.