You are here: Home>Locations>Stratford-upon-Avon>Witchcraft in Sheep Street, Stratford: Jane Ward 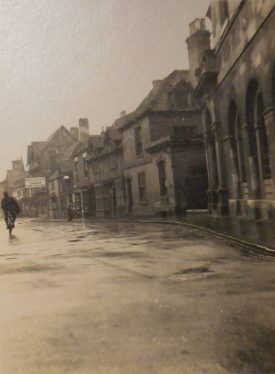 On 3 December 1867 John Davis was sentenced at the Warwickshire Assizes to 18 months’ hard labour for ‘wounding with intent to do grievous bodily harm’ (HO 27/148). His victim was Jane Ward. But what provoked this violent outburst? Apparently headless ghosts had entered his home through the chimney and tormented his family – but what has all of this got to do with Jane Ward?

She was a witch! Or more accurately she was branded a witch by her neighbour John and his family. Various newspaper articles found in the British Library Newspaper Archives give detailed accounts of his claims. He claimed she sent two headless ghosts in the dead of night down his chimney – not just any ghosts mind, one of them was the Patron Saint of Paris, Saint Genevieve. He was said to be carrying his head under his arm like a gentleman would carry a cane.

John Davis claimed they were not particularly pleasant ghosts. They weren’t like Casper the friendly ghost (they were more like his mischievous uncles) – they rearranged the family’s furniture and pinched members of the family. They also turned their attentions to Mr Davis’s disabled daughter, who was thrown off the sofa and then they tossed her around the room, before turning their attentions to the sofa which then suffered the same fate.

So what do you automatically think of when you hear the word ‘witch’? The first thing that automatically comes to my mind is Bette Midler’s portrayal of Winifred ‘Winnie’ Sanderson in Disney’s Hocus Pocus. Many people think of the stereotypical image of an evil haggard woman typically dressed in black who owns a black cat, flies on a broomstick and does her cooking in a caldron.The Oxford English Dictionary has four definitions of a witch, two of which I would like to draw on.

Now what do you automatically think when you hear the word ‘wizard’?

The first things that come to my mind are the fictional character Harry Potter, the legendary Merlin or the 70s glam rock band. The Oxford English Dictionary’s definition of wizard is: ‘(in legends and fairy tales) a man who has magical powers’. It conjures up a completely different image to that of the definition of witch. Examples of how witches are stigmatised are shown in part two.

This article, by Emily Ward-Willis, has been adapted from the National Archives blog, and is reproduced under the terms of the Open Government License.